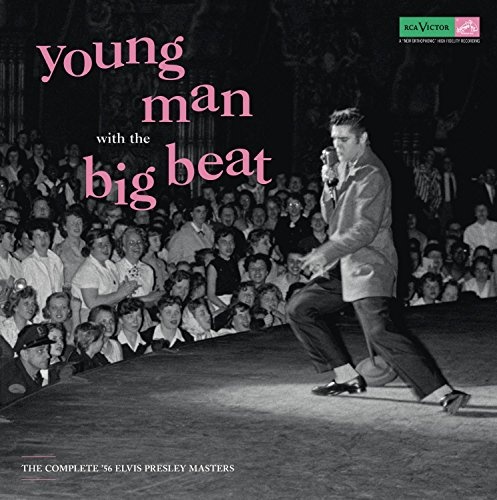 In 1996, RCA released Elvis 56, a single-disc compilation of 21 masters and one alternate take Presley recorded during 1956, the year he became a phenomenon. Fifteen years later, RCA/Legacy bested that set with Young Man with the Beat: The Complete ’56 Elvis Presley Masters, a deluxe five-disc box encompassing two discs of studio recordings, a disc of live recordings, a disc of outtakes, and a disc of interviews. Arriving just a few years after quintuple-disc box The King of Rock & Roll: The Complete ‘50s Masters, the 1996 disc almost seemed unnecessary, as it covered the same ground only not as thoroughly, and Young Man with the Big Beat doesn’t quite escape that criticism, either, as it appears just a year after the gargantuan Complete Elvis Presley Masters box, but the intent of the two boxes is wildly different. Where the 30-disc Complete Elvis Presley Masters boxed up his entire career, Young Man with the Big Beat puts a pivotal year under a microscope, examining it from every angle, and adds a gorgeous hardcover book and memorabilia replicas, in addition to the five discs of music. Music-wise, there is not too much new: only an unearthed performance at the Hirsch Youth Center in Shreveport, Louisiana from December, added to the end of the live disc which contains the least-heard music here. All the live cuts are of marginal audio quality -- they come from rough sources and there’s only so much cleaning to be done -- but there is electricity to the performances, including the cuts from the New Frontier Hotel in Vegas, and that kineticism is palpable throughout the set, including the disc of outtakes that all have been circulated before, whether on the King of Rock & Roll box or various hardcore, fan-targeted Follow That Dream compilations. Surprises aren’t really in store here, but delving so deeply into one area does reveal a few connective threads and mild revelations -- Elvis’ taste for corn was surfacing this early on, and by the end of the year, the wild hepcat of Sun already was somewhat tamed, showing a flair for cool-handed crooning -- and by offering so much pure rock & roll in one concentrated yet exhaustive setting, the set does manage to re-create a portion of the wild excitement Elvis sparked in 1956. So, Young Man with the Beat winds up existing in that netherworld between a hefty historical document and nostalgic time machine; it’s appealing on both fronts, but in order to find it rewarding, you need to already have some strong degree of devotion either to the King or to the year of his coronation.