One of the great ironies about Pot Luck with Elvis is its title, from which one could reasonably infer that it was a collection of leftovers. In fact, Pot Luck was Elvis Presley's last collection of new secular material recorded with a specific album release in mind until seven years later, and a lot less of a "pot luck" affair musically than any of the non-hits studio albums that were ever released of Elvis' material. The album is still a bit uneven, continuing the decline begun with Something for Everybody. While there are several excellent, continually underrated tracks ("Donna Get Back Home Somehow," "Night Rider," "(Such An) Easy Question" and, of course, "Suspicion"), the quality of the songs is somewhat uneven, the ballads especially tending toward the lugubrious. The original release, which charted for 18 weeks and reached number four at its peak, never registered as strongly with the public as his soundtracks of the period did, and this relative failure (the Blue Hawaii soundtrack having charted for more than a year, with months spent at number one) may have forced Presley and his manager to concentrate on film work from this point on, as a commercial necessity. The sad part of that decision was that Pot Luck was a great vehicle for Presley's voice as it was evolving -- "She's Not You" brilliantly showcased the softer, more intense singing style that had manifested itself just a few months earlier with "Can't Help Falling in Love." [The 1999 remastering benefits from superior sound and a 17-song lineup, reaching back to March 1961 for its songs, including the gorgeous "Fountain of Love" and the haunting, gospel-like "That's Someone You Never Forget," which was co-authored by Presley and is one of his best non-hit songs of this era.] 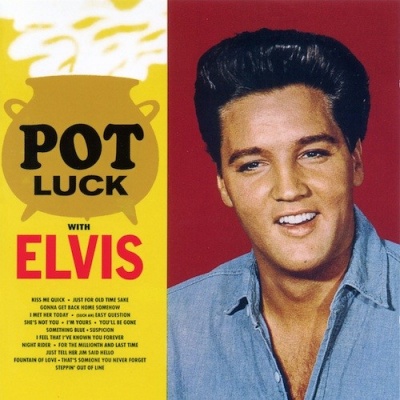