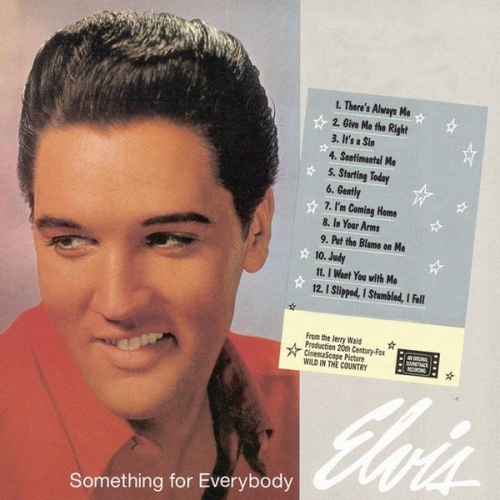 Elvis Presley's third non-soundtrack, post-Army album is, in many ways, his most interesting from those years, though nowhere near his best. Something for Everybody offers a tamer body of songs than Elvis Is Back!, but also shows the effect of Presley's maturation -- his voice is better than ever, and this is reflected in the arrangements, most of which are closer in spirit to the finely crafted pop symphonies of Roy Orbison than they are to any of Presley's earlier work. His ballad performances are impeccable, displaying a richness of intonation and delicacy of nuance that is downright seductive. Rather less successful are the rockers, including "I'm Coming Home," "Judy," and "Put the Blame on Me," which show a cooling of some of the white heat that Presley used to generate on the rhythm numbers. The one moment where the old Elvis Presley manifests himself is "I Want You with Me," a shouter that's only missing maybe a Gene Vincent-style scream or two from the backing band on the choruses.