The last film Elvis made prior to the outbreak of Beatlemania, Fun in Acapulco is redolent of the silly, carefree days of the early '60s -- a time when rock & roll appeared to be in remission, partially because Presley devoted his time to cinematic froth like this. Conceptually, Fun in Acapulco, a kissing cousin to Blue Hawaii, is a lark set in a sunny, exotic location and has a soundtrack to match. Every song has a south of the border feel, either in its rhythms or mock Spanish, a tactic that makes sense in the confines of the film but can be deeply ridiculous on record, particularly on the cartoonish "Guadalajara," where mariachi and opera meet in garish fashion, "(There's) No Room to Rhumba in a Sports Car," and "The Bullfighter Was a Lady," pieces of camp designed to be heard nowhere outside the confines of the film. Such frivolities seem even more absurd when contrasted with similarly spirited cuts that actually do work: the woozy title track, "Mexico," "Marguerita," and "Bossa Nova Baby," which in this context seems to rock pretty hard. Despite all this, the clear standout here is "Slowly But Surely," a bit of hip-swiveling seduction positively drenched in fuzz guitar, the first time such an effect was heard on a Presley record. Here, Elvis seems to tentatively engage with the swinging '60s that are just around the corner, while the rest of the record belongs to squaresville, an aesthetic that's alternatingly amiable and embarrassing. 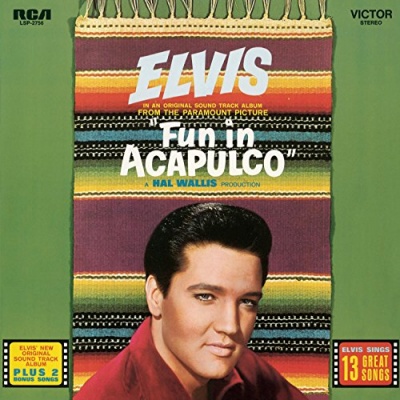