Western swing, blues, countrypolitan, traditional country, gospel -- if it was music that even brushed the airwaves of a southern state, Elvis Presley at his best could make it his own, and Elvis was at his peak when he cut Elvis Country. Actually, Elvis Presley was positively on a roll at the time. A decade after the end of what were thought to be his prime years, he was singing an ever-widening repertory of songs with more passion and involvement than he'd shown since the end of the 1950s; he was no longer transforming the nature of popular music with every record and performance, but he was a major concert draw and tickets to his shows were in nearly as much demand as those for the far less accessible Frank Sinatra. What's more, his voice had achieved a peak of perfection as an instrument, acquiring a depth and richness, a beauty to go with its power at which even his best work of the early years had only hinted. And it all came together on Elvis Country, his greatest long-player of the 1970s, and one of his three or four best albums ever. Elvis threw himself into this record with every bit of the passion displayed on its better known, soul-oriented predecessor, From Elvis in Memphis, and it was even more personal; new or old, these were all songs he cared about. And he's a commanding and charismatic vocal presence, whether he's covering "Snowbird" (a then recent hit for Anne Murray), redoing a 1940s classic by Ernest Tubb ("Tomorrow Never Comes") in an arrangement akin to Roy Orbison's "Runnin' Scared," a Bill Monroe standard of the same decade ("Little Cabin on the Hill"), reprising Jerry Lee Lewis's "Whole Lotta Shakin' Goin' On" in a version dominated by the guitar and bass (and with scarcely any piano), or covering Willie Nelson's "Funny How Time Slips Away" as a slow blues. He doesn't necessarily supplant the originals (except for "Snowbird," where he does make you forget Anne Murray), but he gives you more than enough reason to listen, again and again, to everything here. And good as he is on the covers, nowhere is Presley better than on "It's Your Baby, You Rock It," the only new song on the album and as fine a record as he cut during this entire boom period in his career. Producer Felton Jarvis and a cadre of Nashville sidemen (augmented by James Burton) provided as good backup as Presley ever got, including a hard-rocking electric guitar and harmonica sound on Bob Wills's "Faded Love" and a gospel-style accompaniment to "Funny How Time Slips Away," and giving "Make the World Go Away" a lean, more urgent sound than Eddy Arnold's original hit. 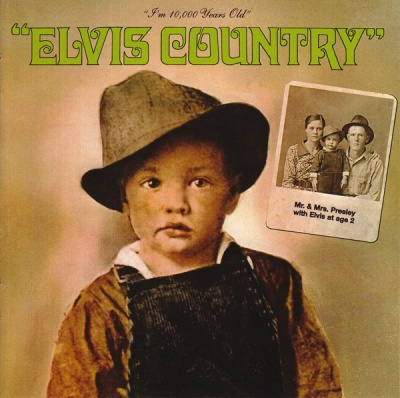