I Got Lucky Review

A companion to C'mon Everybody -- another careless Camden comp released just three months prior -- I Got Lucky shares many similarities to its 1971 cousin, right down to how the jumpsuited King on the cover camouflages how this LP is simply a collection of soundtrack tunes that never made it to a long-player prior to this. Like C'mon Everybody, the source material for I Got Lucky consists of four specific films: Follow That Dream and Kid Galahad, both released in 1962, 1964's Viva Las Vegas, and 1967's Easy Come, Easy Go. The one exception to this is a snappy 1967 cover of Leiber & Stoller's "Fools Fall in Love," which also happens to be the best thing here, probably because all the good stuff showed up on C'mon Everybody. Occasionally, there's a nice moment -- "Home Is Where the Heart Is" floats along sweetly, there's some insouciant swagger to "What a Wonderful Life" -- but it's mainly forgettable formula, highlighted by the bonkers "Yoga Is as Yoga Does," a song that functions as shorthand for how absurd Elvis' films could get. 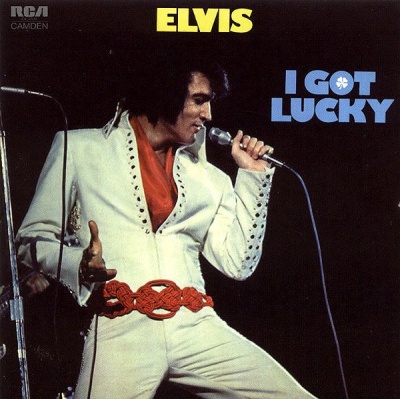 I Got Lucky Album Information