This was one of several live recordings by "the King" to appear during the early '70s and was extremely popular, owing to the quality of the performance and the range and number of songs included, as well as the timing of its release -- older fans, having been denied Elvis Presley's presence on stage for more than a decade, responded to his sudden re-emergence with more enthusiasm than they'd shown for any of his non-hits albums in years; and new listeners, too young to have heard him in the 1950s but latching onto Elvis either directly or as part of the oldies boom, started checking out what all of the excitement was about. The show itself, from June 10, 1972, is the more elaborately produced follow-up to his Las Vegas performances of 1969-1970, Elvis backed by an eight-piece band, an orchestra, and at least eight male and female backup singers (including the Sweet Inspirations) -- once one gets past the opening fanfare of "Also Sprach Zarathustra," there isn't a lot of difference between this and the best of his Vegas shows, except that Elvis is a lot more confident and self-assured here than he is at the early post-"comeback" concerts. Emboldened by the success of those releases and the fact that he was able to sell out arenas like the Garden, RCA also did something here that they hadn't taken the chance on doing with his previous live albums, loading it up with songs new and old, for a generous 52-minute running time. As with all of his shows of this era, the King interspersed his own established repertory -- which embraced everything from "That's All Right" to "Suspicious Minds" -- with songs identified with other performers: "Proud Mary," "You Don't Have to Say You Love Me," and "You've Lost That Lovin' Feeling" were all very suitable for him. Presley was in good form for this show and, by all accounts, this series of concerts, and gave beautifully wrought performances of the ballads, as well as highly energetic renditions of the harder rocking numbers. The sound is surprisingly close, betraying little of the cavernous acoustics of Madison Square Garden -- there is, conversely, very little audience ambience as well, but that's not terribly important, either; much more to the point is that the accompaniment, from James Burton's guitar on down, is all captured reasonably well, thus making this one of the best of the big-venue Elvis Presley concert documents available: exciting, diverting, and mostly impressive as a performance. 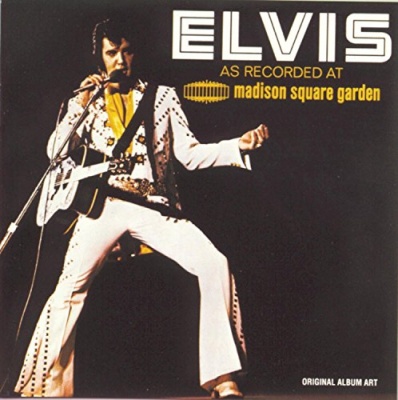