Today it all seems so easy -- RCA signs up the kid from Memphis, television gets interested at around the same time, and the rest is history. The circumstances surrounding this album were neither simple nor promising, however, nor was there anything in the history of popular music up to that time to hint that Elvis Presley was going to be anything other than "Steve Sholes' folly," which was what rival executives were already whispering. So a lot was unsettled and untried at the first of two groups of sessions that produced the Elvis Presley album -- it wasn't even certain that there was any reason for a rock & roll artist to cut an album, because teenagers bought 45s, not LPs. The first of Elvis' RCA sides yielded one song, "Heartbreak Hotel," that seemed a potential single, but which no one thought would sell, and a few tracks that would be good enough for an album, if there were one. But no one involved knew anything for sure about this music. Seventeen days later, "Heartbreak Hotel" was released, and for about a month it did nothing -- then it began to move, and then Elvis appeared on television, and had a number one pop single. The album Sholes wanted out of Elvis came from two groups of sessions in January and February, augmented by five previously unissued songs from the Sun library. This was as startling a debut record as any ever made, representing every side of Elvis' musical influences except gospel -- rockabilly, blues, R&B, country, and pop were all here in an explosive and seductive combination. Elvis Presley became the first rock & roll album to reach the number one spot on the national charts, and RCA's first million dollar-earning pop album. 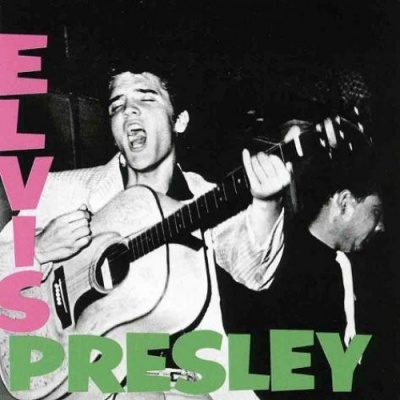