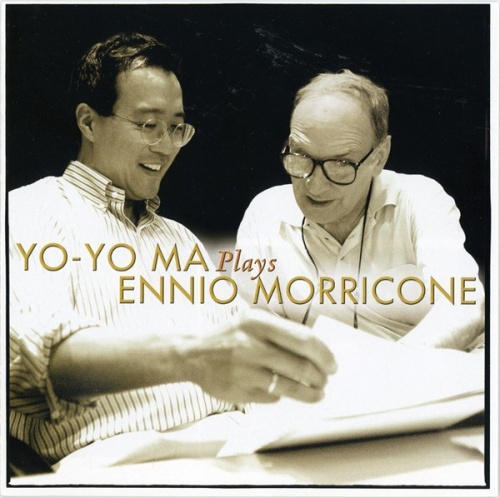 Sure to remain a top seller on the classical charts for some time to come, Yo-Yo Ma Plays Ennio Morricone is a new installment in the great cellist's long series of crossover albums. It diverges from most of the others, however, in its collaborative aspect: the music's original creator, Morricone, had as much to do with this album as did Ma and his creative team. Morricone's career in film music began during the era of the spaghetti Western in the 1960s and has flourished ever since, on both sides of the Atlantic. Morricone and Ma met at the 2001 Academy Awards, where Ma was performing and Morricone was nominated for his score to Giuseppe Tornatore's Malèna. They hatched the idea for this album together, and all the adaptations of Morricone's music are his own. He also conducts the Roma Sinfonietta Orchestra.

Overall, the results are gorgeous. Morricone opens and closes the album with pairs of excerpts from two individual films, The Mission and the rarely seen The Lady Caliph. In between are four suites of excerpts, three of them associated with Morricone's favorite directorial collaborators (Sergio Leone, Brian de Palma, and Tornatore). These suites, comprising varied but closely related stretches of music, really allow Ma to go to town. He has rarely achieved a more lushly beautiful tone or a more direct emotional appeal. Morricone deftly adapts his music for the cello-and-orchestra combination. At different times, Ma's cello plays the role of another solo instrument (the pan pipes in the Mission score, for instance), sings the wordless vocal lines that populate many of Morricone's scores, or plays lines of orchestral counterpoint that are elaborated into some pretty fancy fingerwork.

The only complaints pertain to the selection of music, and it's debatable whether there's really anything to complain about. Represented here are Morricone's big, romantic scores, mostly of fairly recent vintage. Cinema Paradiso, two cues from which are included, is an example casual filmgoers may be acquainted with. The edgier, more experimental scores Morricone wrote for Western and suspense films are ignored, and it was these that endeared the composer to scenesters like John Zorn, who recorded a memorable deconstruction of The Big Gundown some years ago. On the few tracks where electronic elements are introduced, they aren't well integrated into the general concept. As a whole, though, the album hangs together wonderfully, and the music can stand up to anything in the current neo-Romantic rage. Play the "Cockeye's Song" cue from Once Upon a Time in America for classical purists unfamiliar with Morricone, and ask them to guess the composer. Watch them squirm. And then introduce one of the great composers of our time, presented by one of our foremost interpreters.