Focusing solely on American composers (New Yorkers, for that matter), Yo-yo Ma recorded an album with the Baltimore Symphony Orchestra that reprises works from Stephen Albert, Bela Bartok, and Ernest Bloch. After being pampered by his cross-genre releases (Hush, Soul of the Tango, etc), some listeners might not actually care to hear a straightforward classical album, considering the skill with which Ma can play the cello and transform it into an instrument suitable for whatever style he's performing on a given date. These listeners, though, will miss out on quite an occasion -- on the "Concerto for Viola and Orchestra" by Bartok, for example, he trades in his beloved cello for an alto violin and plays with some decent virtuosity on the much smaller instrument. Really, that trade might be the highlight of this album, though fans of American classical music (from the 20th century) will still be overjoyed to hear the works. For those fans, the specific works are Stephen Albert's "Concerto for Cello and Orchestra," Bela Bartok's "Concerto for Viola and Orchestra," and Ernest Bloch's "Schelomo" (Solomon), from the "Hebraic Rhapsody for Cello and Orchestra." Fans of the music will find it enjoyable, as it's performed quite well. Overly extensive liner notes are also a plus. 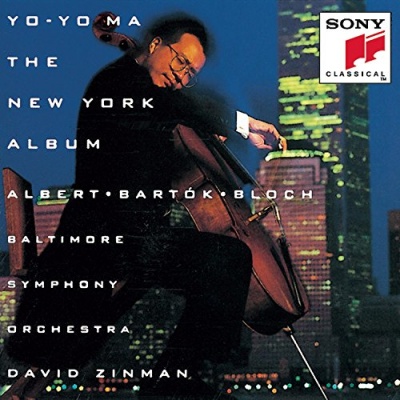