Songs from the Arc of Life Review

Here's a recording that amply demonstrates why Yo-Yo Ma has reached perhaps a wider public than any other serious classical musician. Over the course of his career he has vastly expanded the classical repertory while still staying true to its core. There has been a profound idealism, a high-mindedness, to what he does, combined with an ability to reach ordinary listeners that the greats of the past often mastered, but that is a rare commodity these days. He has rarely recorded short crowd-pleasers and it is typical of his genius that now, when he does so, he does it in an entirely compelling way. The core of the program consists of well-loved classical tunes, including one of the best-loved of all, the Bach-Gounod Ave Maria. But Ma varies the concept in two ways. The first has to do with the explicit program, depicting the "arc of life." The pieces proceed from childhood to youth, adulthood, and finally "beau soir" and death, and the whole thing is nicely explored in the notes in the form of a conversation between Ma and his longtime accompanist Kathryn Stott. They make these rather generic pieces seem like the most personal thing in the world. Then, on top of this, Ma and Stott pick some pieces that aren't common encores at all, such as the "Louange à l'éternité de Jésus," from the Quartet for the end of time. These are exceptionally well chosen to modulate the moods of the arc of life, and by the final group of pieces even the skeptical may well find themselves hypnotized. Throw in superb sound from perhaps the premier American recording venue, Mechanics Hall in Worcester, Massachusetts, and you have an exceptional package that should rightly put Ma and Stott back at the top of the charts. 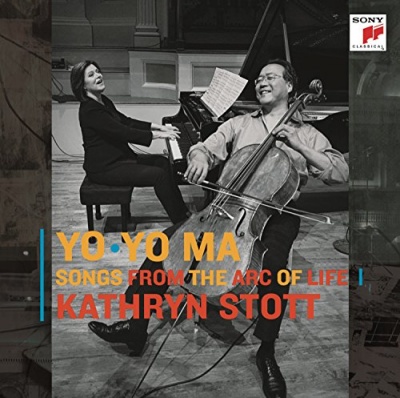 Songs from the Arc of Life Album Information