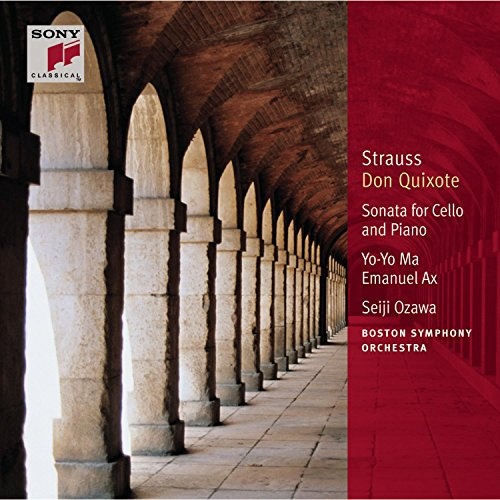 Yo-Yo Ma's devoted fans may accept this album in its entirety unquestioningly, and completists hooked on everything Richard Strauss wrote will take this disc's uneven program in stride. But others should weigh their desire for a good recording of the dazzling tone poem Don Quixote, Op. 35, against the less pressing need to have Strauss' immature Sonata in F major for cello and piano, Op. 6. Ma's performance in Don Quixote is admirably shaded and well-articulated, and the playing of the Boston Symphony Orchestra, under Seiji Ozawa, is fully colored, richly textured, and brilliantly detailed (especially praiseworthy when the density of Strauss' score is taken into account). So this 1984 performance is quite enjoyable, and sounds surprisingly good for a digital recording of the time, thanks to Sony's DSD mastering. The Cello Sonata, though ably played by Ma and pianist Emanuel Ax, is a much less rewarding experience, due to the naïveté of the piece, which seems heavily derived from Schumann but lacks his interesting eccentricities. Strauss was still in his teens when he composed this sonata, so it may be regarded as juvenilia and taken or left as a curiosity. The 1986 recording of the Cello Sonata has also been processed through DSD, so the sound quality here is fine.