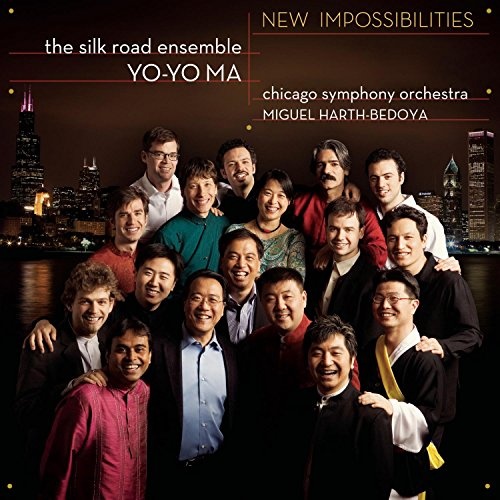 The Silk Road has taken a little detour to Chicago for the latest undertaking by cellist Yo-Yo Ma and his Silk Road Project, which involves collaborations with a wide variety of musicians, not only Asian ones, connected to the Windy City in some way. The triumphs of Ma's forays into world music might be termed logistical ones; he has, over the last decade or so, brought together diverse talents and made it possible for them to collaborate in high-profile, far-flung venues -- no small feat in itself. (It is, as he cheerfully admits in the album's title, "impossible.") Here the grouping is more diverse than ever, involving a Lebanese-American composer, an Iranian one, Chinese and Indian musicians, the Chicago Symphony Orchestra, the peripatetic Argentine-Israeli-American eclecticist Osvaldo Golijov, and Ma's Silk Road Ensemble itself (his own playing appears only intermittently, like small gemstones). All the musicians joined together for big free concerts in Chicago's splendid new Millennium Park; and the concerts were recorded live for this album. If the collaborations are not deep, they are unprecedented, and they are a tribute to Ma's particular brand of genial, crowd-pleasing energy. Energy is not enough to pull something like this off, however; one thing that makes it work is that for the core of the program Ma selected musicians who had already worked across cultures and seemingly had good intuitive ideas about how to pull off this kind of a spectacle. It is not only Golijov, whose avowedly multicultural works are the sensation of the moment. Rabih Abou-Khalil, born in Lebanon, has worked with Indian, Western classical, and jazz musicians in addition to those from his native Middle East; his opening Arabian Waltz is colorful and primes the ear for the simple structures and variegated textures that are to come. The "pure" Chinese Galloping Horses is a diversion, not a main element of the program. The proceedings culminate in Vocussion, containing the virtuoso vocalization of percussion strokes that is characteristic of certain Indian classical forms, here kaleidoscopically spread across several cultures. It's a great crowd-pleaser and another inspired stroke. The problems of cross-cultural understanding may be deeper than Yo-Yo Ma wants to admit, but only a fool would call him part of the problem, and this album is, above all, a lot of fun.