The legendary cellist struck an incredible crossover chord with 2003's lush, exotic excursion Obrigado Brazil, which was the fastest-selling recording of his career and was nominated for four Grammys, including Best Classical Crossover Album. Inspired by working in the studio with clarinetist Paquito D'Rivera, guitarists Sergio and Odair Assad, singer/guitarist Rosa Passos, pianist Kathryn Scott, percussionist Cyro Baptista, and bassist Nilson Matta, Ma gathered the group for an electrifying live show at Carnegie Hall -- which is the basis for this compelling multicultural concert disc. Reaching beyond the original repertoire, Ma opens with a rousing "Libertango" (the first of several Argentine tangos by Astor Piazzolla) and works with D'Rivera on some Latin-flavored originals -- the spirited "Merengue," the haunting and lyrical "Afro," and the jaunty "Wapango," which Ma and the clarinetist play like a frolicsome cat-and-mouse dance. Among a program of extraordinary depth are several familiar tunes by Antonio Carlos Jobim -- including the swaying "Chega de Saudade" (featuring the graceful vocals of Passos) and, of course, an irresistible "Aguas de Marco" (Waters of March), where Ma matches Passos note for note while also swirling around her in spots. 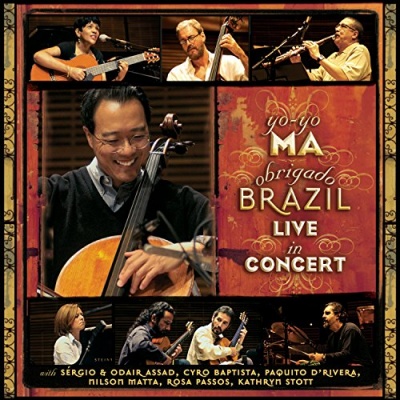