Soul of the Tango: The Music of Astor Piazzolla Review

Inspired by a general love of the tango, and more specifically the tango of Astor Piazzolla, on the part of Yo-Yo Ma, the Soul of the Tango album is a masterful work of the nuevo tango, played by Ma's cello and many of Piazzolla's former associates. Piazzolla's old guitarists Sergio and Odair Assad even showed up to work on a pair of tracks arranged by Sergio: the Tango Suite (consisting of Andante and Allegro). The sheer beauty of one of Piazzolla's tangos is generally enough to warrant the purchase of an album involving them. An album such as this one, where all of the songs (save one: Tango Remembrances, where Ma plays along with outtakes from Piazzolla's recording of The Rough Dancer and the Cyclical Night album) are compositions by Piazzolla is even better. Add to this the masterful playing of Ma, and the surprising facility in which the cello fits into the tango, and you've got what could become a classic album, if only it weren't on the classical label from Sony. The album begins with Libertango, a composition from Piazzolla's first album that became the theme song for the movie The Tango Lesson. Following is the pair of tracks in the Tango Suite from Sergio Assad. Then comes Sur: Regreso al Amor, a softer work, though with some definite virtuosity displayed. Le Grand Tango is an eleven minute tour de force in the tango, and Fugata is a tango written under the guidelines of a classical fugue. The next work is the aforementioned Tango Remembrances, which is a particularly nice work, probably due to the appearance of Piazzolla's own playing. Mumuki is a more complicated composition, and Tres Minutos con la Realidad is a choppier, peppier work. Milonga del Angel is a seemingly sentimental work that shows off Piazzolla's ability to express the emotions of a song perfectly and purely. To finish the album, Ma presents Café 1930, a rather slow paced work, but again, as in Milonga del Angel, expresses emotion very fully in its nostalgia. Overall, the album is a stunning work of art, and even those that may not have heard of Piazzolla could easily be lured to his music via this single album. 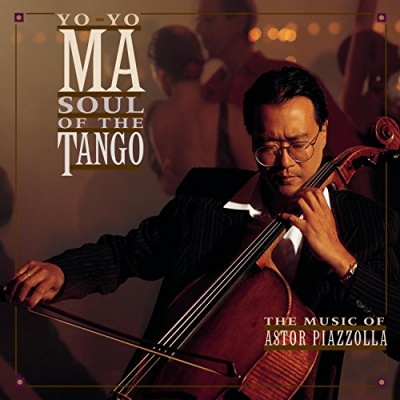 Soul of the Tango: The Music of Astor Piazzolla Album Information