The Complete On the Corner Sessions Review

From the opening four notes of Michael Henderson's hypnotically minimal bass that open the unedited master of "On the Corner," answered a few seconds later by the swirl of color, texture, and above all rhythm, it becomes a immediately apparent that Miles Davis had left the jazz world he helped to invent -- forever. The 19-minute-and-25-second track has never been issued in full until now. It is one of the 31 tracks in The Complete On the Corner Sessions, a six-disc box recorded between 1972 and 1975 that centers on the albums On the Corner, Get Up with It, and the hodgepodge leftovers collection Big Fun. It is also the final of eight boxes in the series of Columbia's studio sessions with Davis from the 1950s through 1975, when he retired from music before his return in the 1980s. Previously issued have been Davis' historic sessions with John Coltrane in the first quintet, the Gil Evans collaborations, the Seven Steps to Heaven recordings, the complete second quintet recordings, and the complete In a Silent Way, Bitches Brew, and Jack Johnson sessions. There have been a number of live sets as well; the most closely related one to this is the live Cellar Door Sessions 1970, issued in 2005.

What makes The Complete On the Corner Sessions the most compelling of these many deluxe box set issues is that the album derived from it remains the most controversial album Davis released. Certainly, there have been many revisionist theories about On the Corner -- since it proved to be so influential -- by a number of critics who reviewed it rather savagely upon its original release. There are many others who still consider it the ultimate sellout by the biggest figure in the music at the time. Certainly Bitches Brew and Jack Johnson had their share of naysayers, but the the music that transpired first on In a Silent Way had its roots in the final second quintet recordings: Water Babies, Miles in the Sky, and Filles de Kilimanjaro. Bitches Brew took its cue from In a Silent Way and moved it further, creating more rock-like jams based on vamps and motifs rather than chord changes. Jack Johnson took it still further, but the notion of soloing was still a very prevalent thing, as it had been on Bitches Brew. But On the Corner, while related in terms of groove, is a further extension of everything from In a Silent Way on; it is worlds away from any of them -- including the material that produced Live-Evil in 1971. The reason is simple -- everything came down to only two things: rhythm and sound itself. Serious questions were being asked in the making of this music, and where it was going only manifested itself in the travel. How low could you go? How little could you play? How much space was necessary to get the groove to move and what would you fill it with?

Davis stripped everything back to endlessly repetitive, circular, and hypnotic rhythm based on the foundation of then 19-year-old bassist Henderson's minimal grooves with an array of percussionists along with a trap kit to shore it up like an impenetrable wall. The use of everything from cowbells and woodblocks to congas and tables enabled the musicians to dig deep into the territory of beat and rhythm. Melody was an accident. Chords changes were nonexistent; soloing contributed to the atmosphere in short bursts and was layered atop caverns of sound by whatever instrument was called up at the time to play. Otherwise they laid out, or played some kind of rhythmic pattern to enhance the atmospheric groove, which was sometimes nearly spiritual, and sometimes downright freaky and spooky. The groups were ever-changing; 27 musicians played in those 16 sessions, and individual tracks would employ groups from five to 12 players. The names of those players are synonymous with the groundbreaking expressions of electric and acoustic creative jazz and funk in the '70s and '80s: Jack DeJohnette, Badal Roy, John McLaughlin, David Liebman, Carlos Garnett, Mtume, Collin Walcott, Pete Cosey, Reggie Lucas, Dominique Gaumont, Bennie Maupin, Sonny Fortune, Khalil Balakrishna, Al Foster, Lonnie Liston Smith, Harold "Ivory" Williams, Herbie Hancock, Chick Corea, Cornell Dupree, Bernard Purdie, Billy Hart, and Don Alias.

When producer Teo Macero dropped the heavily edited 52-and-a-half-minute album off at Columbia, the stage was set for the jazz world to be shaken to its core. Macero should be given more credit than as merely "producer." Miles may have run the sessions, but it was Macero who congealed them onto this single LP. It was he who, along with Davis, had been seduced by the electronic tape manipulation techniques of Karlheinz Stockhausen as introduced to them by composer and arranger Paul Buckmaster -- who wrote his own long liner essay in the accompanying booklet based on his memories of those sessions. Critics flipped, realizing that Davis was never coming back to jazz as they knew it. He was not merely tickling a fancy he entertained after coming under the sway of Jimi Hendrix and Sly Stone. Davis was not playing for popularity among a younger generation of fans -- he was going for broke in changing his entire approach to composing and playing music. Those scribes who dismissed On the Corner as pop had obviously never listened to rock, because it sounded nothing like this. On the Corner was further out than any album ever recorded, and in fact the only one in its league was Funkadelic's Maggot Brain -- and even that was more song-structured than this. Everything was up for grabs, and even rock fans didn't know how to dig it; they just did. And yes, on disc six, it is presented as originally issued, bookended by other tracks.

Bob Belden does a painstaking job of annotating this set from its inception in 1972 until the last studio date in 1975. He offers not only dates and players, but also disputes findings found in earlier discographies, and notes that in some instances either nothing took place or the tapes have been lost. He also reveals how little Miles himself plays on certain sessions, and as to whether a session was used as an overdub session or a full-on recording date. These six discs contain six and a half hours of music. There are 12 completely unissued cuts, and five others that have never been heard in full until now. An example of how fertile the earliest period was can be found on disc one. That early session from June 1, 1972, netted the four-part variation on a theme that became "On the Corner/New York Girl/Thinkin' One Thing and Doin' Another/Vote for Miles" and a second-take version of "Black Satin." The second date, five days later, yielded "Helen Butte/Mr. Freedom X" and "One and One." So what's on the rest? Process. Material that ended up edited or in full on Get Up with It and Big Fun is here unvarnished, except for beautiful sound reproduction: "Ife," "Chieftain," "Red China Blues," "Billy Preston," the screaming guitar craziness of McLaughlin on "The Hen," two takes of "Big Fun/Holly-wuud," "Mr. Foster," "Peace," "Rated X," "He Loved Him Madly," "Turnaround," "U-Turnaround," "Maiysha," "Mtume" (two different takes very different in length and feel), "Minnie," "Hip Skip," "What They Do," etc. Much has been heard before, but plenty of this music hasn't -- the unheard music makes up nearly a third of this set. The roots of the jams heard on In Concert: Live at Philharmonic Hall, Dark Magus, Agharta, and Pangaea are here, as are the moments from all those bootleg live records from over the years. But back to process.

While Belden's annotations and Buckmaster's memories are extremely helpful in the case of the former and revealing and personal in the case of the latter, it is Tom Terrell's excellent historic essay that brings the real perspective and offers a way into the sounds themselves. Presented here are ideas that vanish almost as quickly as they occur, and others -- such as on the extended takes of "On the Corner," "Big Fun," "The Hen," and "Billy Preston" -- where they are allowed to develop slowly and purposefully, with no end in sight. The potential of musicians means nothing outside this sound lab. They are all basically asked to surrender their acumen at the door and find a way to play as a unit following something mercurial and uncertain, sometimes even when it bores them. Textures that weave Maupin's bass clarinet with Carlos Garnett's soprano and tenor saxophones sound strange next to Dave Creamer's guitar, but are all brought into line with the rhythmic attack of Hancock's piano and Williams' organ, with Roy and DeJohnette cranking on the lines provided by Henderson. The solo space can be searing with Davis' trumpet splatters or Maupin's low-register modal inquiries, McLaughlin sending splintering shards of guitar up against the tower of pulse, but none of it ever leaves the realm of rhythm for melody or harmonic convergence. The music, though it stops on the tape, could have gone on for hours and even days. This is the actual sound of Miles running down the real voodoo as funk and ambience give way to sonic exploration, and instrumental largesse happens in the beat, not in the solos.

It took this long to realize just how big an impact On the Corner has had -- some 35 years later -- on the music that came after it in electric jazz sure, but elsewhere too. Listeners still never grasped it entirely and perhaps still won't. But only now does the possibility even exist to discover not only how this album came about and what Miles was up to, but what else was percolating in that murky underground, in the world of sound, unheard and even unimagined until the moment it made it onto tape with those various groups of players. The bottom line is that the music on the album itself influenced -- either positively or negatively -- every single thing that came after it in jazz, rock, soul, funk, hip-hop, electronic and dance music, ambient music, and even popular world music, directly or indirectly. All of it can be traced to On the Corner. There is a world here waiting to be discovered. This is a fitting end to Columbia's studio projects of Davis, but more than that, it can be argued that if you would only allow yourself one of these box sets, especially of the post-In a Silent Way material, it should be this one, because it will no doubt be listened to most and arguably leave the deepest impression. It will take you there and keep you there for as long as you want to stay. 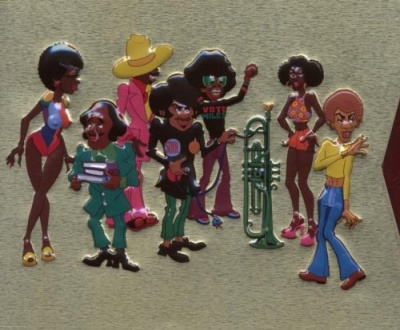 The Complete On the Corner Sessions Album Information