Along with its sister recording, Pangaea, Agharta was recorded live in February of 1975 at the Osaka Festival Hall in Japan. Amazingly enough, given that these are arguably Davis' two greatest electric live records, they were recorded the same day. Agharta was performed in the afternoon and Pangaea in the evening. Of the two, Agharta is superior. The band with Davis -- saxophonist Sonny Fortune, guitarists Pete Cosey (lead) and Reggie Lucas (rhythm), bassist Michael Henderson, drummer Al Foster, and percussionist James Mtume -- was a group who had their roots in the radically streetwise music recorded on 1972's On the Corner, and they are brought to fruition here. The music on Agharta, a total of three tunes spread over two CDs and four LP sides, contains the "Prelude," which clocks in at over a half-hour. There is "Maiysha" from Get up With It and the Agharta "Interlude," which segues into the "Theme From Jack Johnson." The music here is almost totally devoid of melody and harmony, and is steeped into a steamy amalgam of riffs shot through and through with crossing polyrhythms, creating a deep voodoo funk groove for the soloists to inhabit for long periods of time as they solo and interact with one another. Davis' band leading at this time was never more exacting or free. The sense of dynamics created by the stop-start accents and the moods, textures, and colors brought out by this particular interaction of musicians is unparalleled in Davis' live work -- yeah, that includes the Coltrane and Bill Evans bands, but they're like apples and oranges anyway. Driven by the combination of Davis' direction and the soloing of Sonny Fortune and guitarist Pete Cosey, who is as undervalued and underappreciated for his incalculable guitar-slinging gifts as Jimi Hendrix is celebrated for his, and the percussion mania of Mtume, the performance on Agharta is literally almost too much of a good thing to bear. When Cosey starts his solo in the "Prelude" at the 12-minute mark, listeners cannot be prepared for the Hendrixian energy and pure electric whammy-bar weirdness that's about to come splintering out of the speakers. As the band reacts in intensity, the entire proceeding threatens to short out the stereo. These are some of the most screaming notes ever recorded. Luckily, since this is just the first track on the whole package, Davis can bring the tempos down a bit here and there and snake them into spots that I don't think even he anticipated before that afternoon (check the middle of "Maiysha" and the second third of "Jack Johnson" for some truly creepy and beautiful wonders). While Pangaea is awesome as well, there is simply nothing like Agharta in the canon of recorded music. This is the greatest electric funk-rock jazz record ever made -- period. 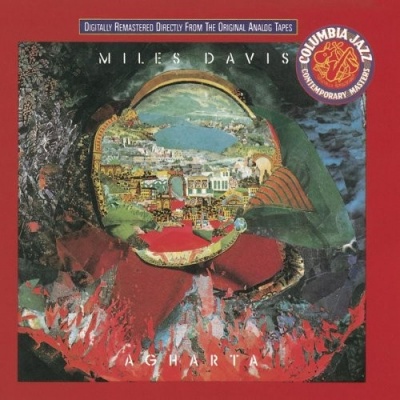