Get Up with It Review

When Get Up with It was released in 1974, critics -- let alone fans -- had a tough time with it. The package was a -- by then customary -- double LP, with sessions ranging from 1970-1974 and a large host of musicians who had indeed played on late-'60s and early-'70s recordings, including but not limited to Al Foster, Airto, John McLaughlin, Reggie Lucas, Pete Cosey, Mtume, David Liebman, Billy Cobham, Michael Henderson, Herbie Hancock, Keith Jarrett, Sonny Fortune, Steve Grossman, and others. The music felt, as was customary then, woven together from other sources by Miles and producer Teo Macero. However, these eight selections point in the direction of Miles saying goodbye, as he did for six years after this disc. This was a summation of all that jazz had been to Davis in the '70s and he was leaving it in yet another place altogether; check the opening track, "He Loved Him Madly," with its gorgeous shimmering organ vamp (not even credited to Miles) and its elaborate, decidedly slow, ambient unfolding -- yet with pronounced Ellingtonian lyricism -- over 33 minutes. Given three guitar players, flute, trumpet, bass, drums, and percussion, its restraint is remarkable. When Miles engages the organ formally as he does on the funky groove that moves through "Maiysha," with a shimmering grace that colors the proceedings impressionistically through Lucas, Cosey and guitarist Dominique Gaumont, it's positively shattering. This is Miles as he hadn't been heard since In a Silent Way, and definitely points the way to records like Tutu, The Man with the Horn, and even Decoy when he re-emerged.

That's not to say the harder edges are absent: far from it. There's the off-world Latin funk of "Calypso Frelimo" from 1973, with John Stubblefield, Liebman, Cosey, and Lucas turning the rhythm section inside out as Miles sticks sharp knives of angular riffs and bleats into the middle of the mix, almost like a guitarist. Davis also moves the groove here with an organ and an electric piano to cover all the textural shapes. There's even a rather straight -- for Miles -- blues jam in "Red China Blues" from 1972, featuring Wally Chambers on harmonica and Cornell Dupree on guitar with a full brass arrangement. The set closes with another 1972 session, the endearing "Billy Preston," another of Davis' polyrhythmic funk exercises where the drummers and percussionists -- Al Foster, Badal Roy, and Mtume -- are up front with the trumpet, sax (Carlos Garrett), and keyboards (Cedric Lawson), while the strings -- Lucas, Henderson, and electric sitarist Khalil Balakrishna -- are shimmering, cooking, and painting the groove in the back. Billy Preston, the organist who the tune is named after, is nowhere present and neither is his instrument. It choogles along, shifting rhythms and meters while Miles tries like hell to slip another kind of groove through the band's armor, but it doesn't happen. The track fades, and then there is silence, a deafening silence that would not be filled until Miles' return six years later. This may be the most "commercial" sounding of all of Miles' electric records from the '70s, but it still sounds out there, alien, and futuristic in all the best ways, and Get Up with It is perhaps just coming into its own here in the 21st century. 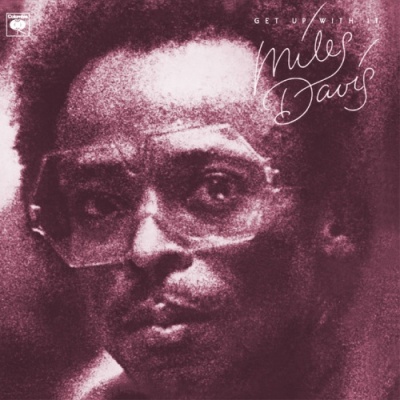 Get Up with It Album Information