In Person: Friday Night at the Blackhawk Review

The first of two sets recorded during a weekend in 1961 features the Miles Davis Quintet at a period of time when Hank Mobley was on tenor and the rhythm section was comprised of pianist Wynton Kelly, bassist Paul Chambers, and drummer Jimmy Cobb. What is most remarkable is the way Kelly fits into this particular blend of the Miles band. Kelly's interplay with Chambers is especially brilliant, because his sense of blues phrasing inside counterpoint harmony is edgy and large, with left-hand chords in the middle register rather than sharp right-hand runs to accentuate choruses. Davis himself has never played with more intensity and muscularity on record than he does here. He is absolutely fierce, both on the Friday night and Saturday night sets. Kelly plays more like a drummer than a pianist, using gorgeously percussive left-hand comps and fills to add bottom to the front line's solos. Mobley displays his bebop rather than hard bop and groove sides here, and reveals his intricate knowledge of the bop phraseology; he sounds free of the baggage and responsibility that he replaced John Coltrane and Cannonball Adderley. His solos on "If I Were a Bell" and "No Blues" are simply revelatory. This is an underappreciated group because of its relatively short life, but as evidenced here, the bandmembers swung fast and hard and never looked back. Hearing a dropped bassline, an out-of-time cymbal flourish, and a shortened series of phrases by Miles because he miscounted -- you guess the track -- adds to the charm of this being recorded as it was, without any cleanup. It is difficult to recommend this set over Saturday Night or vice versa; Miles fans will need both to fully appreciate how special this engagement with this particular band was. 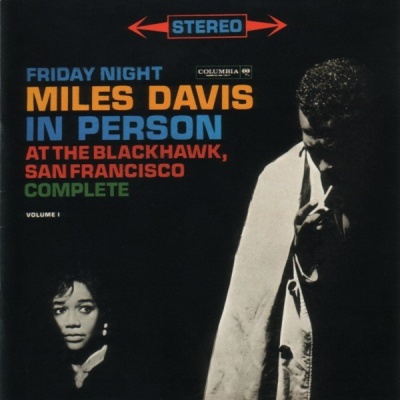 In Person: Friday Night at the Blackhawk Album Information