In Person: Saturday Night at the Blackhawk Review

The second volume in the (finally) complete recordings from Miles Davis' legendary two-night stand at the Blackhawk in 1961 with his new quintet -- which featured Hank Mobley, Wynton Kelly, Paul Chambers, and Jimmy Cobb -- is as stunning as the first. While this set has been available in many different configurations in the U.S. and Japan over the years, it has never been complete until now. In Person: Saturday Night at the Blackhawk features no less than nine unreleased performances -- including an unprecedented fourth set on two CDs. The groove is quite different on Saturday evening. Rather than the slashing bop of Sonny Rollins' "Oleo" from Friday, a loping, bluesed-out version of "If I Were a Bell" opens the program. Kelly's interplay with Davis here is enlightening and inspiring; his comps and fills dance around the trumpeter's solo without ever punching through its center. His sense of timing is remarkable in how he anticipates the end of Miles' lines. He shifts gears with Mobley, who is in a speedier Coleman Hawkins mood here and pushes the middle harder, more percussively, as Mobley then plays all around the changes. This gives way to an unbelievably speedy "So What," clocking in at over 12 minutes and driven by Chambers' pizzicato bass playing. Davis' solo in the first few choruses is more reminiscent of his tenure with Charlie Parker than anything of his own, except for the warmer tone. The tune is an odyssey of harmonic invention with Kelly acting as a bridge between Davis and Mobley, offering wide-open sevenths and diminished fifths for each player to wander in and out of. Kelly's solo comes right out of the blues, pure and angular; his touch is heavier -- deep left-hand accents and trills decorate it.

The second set's "On Green Dolphin Street" nearly segues into an unreleased, burning version of "Walkin'" at almost double tempo. Miles' intensity here is truly shocking. He drives this band -- a listen to Cobb's timekeeping on "Walkin'" reveals just how hard this band was striding these blues. After 12 minutes of blinding speed and melodic invention, the complex harmonic architecture is resolved through intricate line interplay between Davis and Kelly and Mobley at about five minutes and 30 seconds into the tune, and it slips into a space where struggle ceases and the blinding tempo becomes pure grooveology. Davis throws the crowd -- and the band, judging by a missed cue -- a changeup by slipping into a nearly modal, front-end "'Round Midnight." This one swings easily and sweetly, a bit faster than any Miles band had played it ever before, but far slower than anything else in the first set. And as if this weren't enough of a Monk switch, the band closes out the set with a blazing "Well, You Needn't" before the band's theme takes it out for intermission. Tracks three and four on disc two are characterized by a heretofore unissued "Autumn Leaves" (which starts a few seconds in because the tape recorder wasn't on in the club -- it's not an edit). An easy, swinging, sprightly version of this chestnut is so relaxed and free that Davis and his mute feel free to stretch his own short notes into longer lines. Chambers' "Two Bass Hit" is played at a blistering tempo, with Cobb double-timing an already overdriven ensemble. Set four is late-night Miles; the band moves through three tunes as encores, seemingly -- gorgeous lyrical balladry with Davis opening up large spaces in the middle for Chambers to become the focal point of the rhythm section. The tunes "I Thought About You" and "Someday My Prince Will Come" swing with easy late-night grace and charm. Chambers' insistent one-note pulse is contrasted by Kelly's whimsical opening solo before the verse. Miles takes it in relaxed mode, allowing the tune to unfold rather than be played. As if unwilling to let the audience off easy, the end of set four closes out with another surprise, a shifty, double-tempo read of "Softly, As in a Morning Sunrise" that becomes a hard bop blues before it ends abruptly, leaving the house in shambles. How this last set was never released before is beyond belief; thank goodness this historic document has finally been assembled in its entirety. 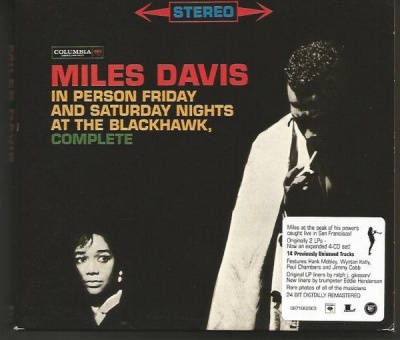 In Person: Saturday Night at the Blackhawk Album Information