Of the myriad double-live sets Miles Davis recorded in the early '70s, In Concert: Live at Philharmonic Hall is the only one documenting his On the Corner street-funk period, which is immediately obvious from the cover art. Actually, in terms of repertoire, the material from Get Up With It, Big Fun, and A Tribute to Jack Johnson each takes up a greater percentage of space, but the hard-driving rhythms and plentiful effects make it clear which of Davis' fusion aesthetics applied. In Concert begins to move Davis' live work even farther away from jazz tradition, as he largely forgoes concepts of soloing or space. Instead, Davis presides over a pulsating mound of rhythm, expanding his percussion section and using traditional lead instruments more to create texture -- including his own horn, which he feeds through a wah-wah pedal and other amplification effects. Drummer Al Foster, tabla player Badal Roy, and percussionist Mtume are the centers of the recording, and electric sitar player Khalil Balakrishna adds an exotic dimension to the already tripped-out sonic stew. And "stew" isn't too far off -- the individual voices and elements in the music tend to get mixed and muddled together, which may be frustrating for some jazz fans not used to listening for the thick layers of texture in the soundscapes or the furious energy in the grooves. There are few melodies to latch onto, save for a theme from On the Corner that Davis frequently uses during the first disc to signal transitions. But melody isn't the point of this music; it's about power, rhythm, and the sum energy of the collective, and of Davis' electric jazz-rock albums, In Concert does one of the most mind-bending jobs of living up to those ideals. 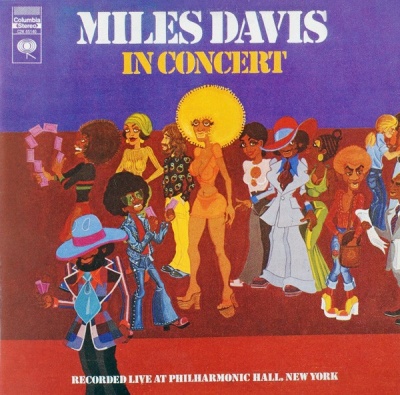