Columbia Records has been diligent about going through Miles Davis' massive catalog, painstakingly remastering and reissuing his collected works in both handsome box sets sorted by period and actual releases annotated with extra material from their attendant sessions, but this gargantuan set marks a true departure for them. The Complete Miles Davis Live at Montreux 1973-1991 compiles 20 CDs documenting every performance by the trumpeter at the famed Swiss jazz festival in its entirety. What's more, 19 of these volumes have never before been issued in any form. Aside from disc 19, which features the Miles band playing acoustically in front of a large orchestra conducted by Quincy Jones in 1991 (which was released by Warner Bros.) and a few selected cuts tacked onto other recordings, none of this material has seen the light of day anywhere. There is a story told here, one that streams light into the darkened corners of Davis' final public period, and one that challenges evidentially virtually every jazz nerd's view that as a bandleader or as a creative improvisational force, Davis was finished after the release of On the Corner. Part of that story is the intuitive sense Davis had of the bandstand and what could be accomplished there. His uncanny ability to pick the finest musicians for the job at hand was illustrated by his stage direction. Another argument for this material is that, even if it doesn't vindicate the studio material of the time, which is rightfully thought of as inferior to his earlier work (with the possible exceptions of the Decoy and Tutu albums), it at least justifies it; these recordings can now be seen as piecemeal explorations of what might be possible in concert settings -- not as rehearsals, but as source material. Lastly, as documented here, Davis accomplished everything he set out to do, which was to take the sophistication of jazz, the accessibility of pop, and the sheer groove of R&B and funk, to create a new American music that was familiar and challenging. Also, that virtually everything here comes off as emotionally honest, even painstakingly so, is a testament to the heart of the musician and, yes, the man.

Discs one and two from 1973 represent Miles' first and only appearance during that decade at Montreux -- represented by two full sets. The band was a stellar one: the Dark Magus band, featuring saxophonist Dave Liebman, guitarists Reggie Lucas and Pete Cosey, drummer Al Foster, new bassist Michael Henderson, and percussionist Mtume. The rest of the material picks up at the end of the infamous "silent years," exactly 11 years later in 1984, and moves through to the virtual end -- a bonus to the set is a concert in Nice just before the trumpeter died (there are a pair of California dates that are later, but these will be forthcoming at a later date). The 1973 date embodies the epitome of the dark, swirling funk of Davis' best '70s material. Here Henderson adds something new to the rhythm section in that he is not a jazz player, but a funk player swiped by Davis from the Stevie Wonder band. His long chunky repetitive riffs are exactly what Davis had been looking for since In a Silent Way. His shift was toward vamps and lines that drifted along into completely uncharted territory, without guidelines like changes or melodic frames. There is a deep bluesy feel to this band's brand of acid voodoo funk that is not only hypnotic, but intoxicating in its dynamic, with the musicians' ability to be frighteningly aggressive -- you can hear the audience's confusion -- or seductive and mysterious. This is all improvisation, all groove, all manner of rock, blues, jazz, and funk in an inseparable endless knot. The two discs are notated by three parts of "Miles in Montreux," the best take of "Ife" there is, and a gorgeously menacing "Calypso Frelimo."

But the real story actually begins with discs three and four (five and six are all part of the same day's shows -- there were four on July 8, two in the afternoon and two in the evening -- completely refuting the argument that Davis was lazy in his final decade). All members of the 1973 band except Foster had gone their own ways. The current lineup featured future Rolling Stones bassist Darryl Jones, guitarist John Scofield, saxophonist Bob Berg, keyboardist Robert Irving III, and percussionist Steve Thornton. With this band, Miles began his complete integration of popular music forms, most notably song, into his improvisational settings. Here, songs like "Star People" and the Eaves and Williams classic "Something's on Your Mind" were given an open treatment that allowed for maximum groove-ology, leading to minimal interference by the temptation to "make them jazz." This band began to sing, with Berg's strong, upfront tenor matching Miles' more spare and lyrical style. Scofield, with his roots in both Wes Montgomery and T-Bone Walker, provided a perfect foil for the rhythm section, which plotted the groove according to Miles' Zen-like live directions, his counterpoint so subtle and precise it would be impossible to separate him from the melodic body of the tune being played. Nowhere is the story of Miles or his band told more completely or nakedly than in disc four's version of Cyndi Lauper's "Time After Time." Needless to say, with so many shows being done each year (and, as noted, multiple shows in a single day), the set lists for a given year's performances (and for virtually the entire late '80s) vary only slightly. Performances, however, are another matter entirely. "Time After Time" is showcased on this set no less than nine times. Each version is truly compelling, of a different length, in a different place in the set, and of varying intensity. But nowhere does Davis express the depths of his soul more completely and nakedly than on the first track of disc four. This is Miles singing a kind of secret song. The lyricism is so harmonically elegant and the emotion in the melodic line and ensuing improvisation is so honest that they are heartbreakingly beautiful. Without exaggeration, listeners had never heard Miles Davis like this before. Here is the bandleader, composer, cultural icon, musician, and human being reduced to the purity of music. The fact that this moves off into "Hopscotch/Star on Cicely" reveals even more of its emotional honesty, because the band does an about-face and moves into equally lyrical but rhythmically more intense music for the rest of the set.

Disc 11 marks another turn in the live band saga, in that Robben Ford replaces Scofield and Adam Holzman is added as a second keyboardist, with Felton Crews replacing Jones on bass. This band is significant in that it allowed Davis to begin to experiment more with textures, even in the older material -- the first set from 1986 begins with the "Theme From Jack Johnson" that kicks off a medley including "One Phone Call/Street Scenes" and "That's What Happened." The rhythmic atmosphere is more lush but no less funky, thanks in no small part to Ford's fiery guitar artistry and the entwining of Berg's and Davis' styles now developed to a symbiotic intensity. As the set closes with "Tutu" and "Splatch," listeners can already heard the advent of the gorgeous sonic tapestries that Miles would usher in when he added two bass players a short time later. Moving up through disc 18 and on to disc 20, the twin basslineup of Joe "Foley" McReary on lead bass and Benny Rietveld on bass proper is heard. Also, it should be noted that while tenor saxophonist Rick Margitza plays on half of the performances from this period, and with a great strength, agility, and verve never displayed in his own recordings, it is Kenny Garrett who offered Davis more in terms of pure expression and the willingness to let the boundaries fall. In fact, Garrett actually offered Davis more musical adventure and tonal expansion than any saxophonist who played with him since John Coltrane. While the band was taking its funk stride to new levels -- so much so that Al Foster, a longtime Miles drummer, finally left and was replaced by Vincent Wilburn Jr. -- Garrett kept the jazz experimentalism and improvisational power that the band was capable of front and center. Check his solos on "Jean-Pierre," Prince's "Movie Star," and "Tomaas" on disc 14 for references. The previously issued orchestral disc 19 was intended to re-create the Miles Davis/Gil Evans collaborations. It is a necessary inclusion here since it took place at Montreux, but it is a Quincy Jones outing more than anything else. On it, Wallace Roney instead of Davis played some of the sight-read parts, and while the music is certainly competent and dynamically rich, it feels overblown and, well, staged. The final disc of the set was not from Montreux at all but from a concert in Nice, France, 11 days after the Jones/Davis event. This featured a new kind of Davis band, stripped of its percussionist and guitarist. Garrett is there with Miles leading the band through very intricate, moving, and ultimately sad material. The twin basses carry the spirit of the music into the no man's land of groove while the keyboards and drums punch through the winsome and wistful horn parts.

Ultimately, not every performance of every tune here is stellar. How could they be? Some years are stronger than others, but none are throwaways by a long shot. Each gig has moments that are truly magical and frightening in their intensity and with astonishing communication between Davis and his band. And Davis' memory does not have an editor to thank here, in that these performances are completely unedited and are not messed with in any way -- the original mixes were used for release. The only truly annoying thing is that whoever was recording the shows would switch the deck off between tunes, and therefore some of the magic at the end of a track, when the audience absorbs it completely, is lost. But this is a very small complaint for a very large box set. The liner notes are reminiscences by Montreux founder and director Claude Nobs with production and musical annotations by German jazz journalist Nick Liebman. The design is beautiful but a bit impractical, since the only way to know what is playing on what disc is to use the enclosed book -- the CDs are divided up into two booklets of ten. It's true, it will really appeal most to those fans of Davis who have to have everything and to those who are completely enamored with his electric period. But it should be of interest to every rock fan who holds the jam band aesthetic high, to die-hard fans of '70s and '80s acid funk, and to those who have been desperately looking for proof that Miles was not only not artistically bankrupt during the last 20 years of his life, but had finally succeeded in accomplishing his goal of total integration of the musical forms that obsessed him. 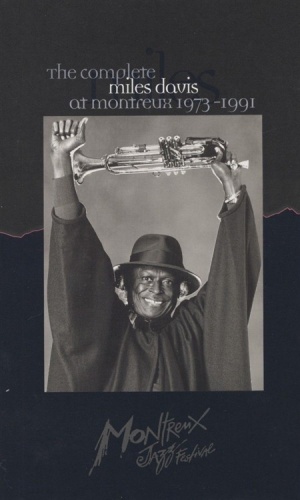