The seventh volume in Miles Davis' award-winning Bootleg Series is comprised of unreleased material from the sessions for his final Columbia studio albums -- Star People, Decoy, and You're Under Arrest -- that appeared annually from 1983 to 1985. They reveal the profound influence that era's pop music and MTV had on the trumpeter. The three-disc box assembles 19 alternates and outtakes, alongside the live What It Is: Montreal 7/7/83, issued for Record Store Day. The booklet includes interviews with the musicians and producer.

Eight of disc one's ten tracks are drawn from 1983's Star People sessions, the last Davis recording, produced by Teo Macero. It opens with his bleating synth intro to the 13-minute "Santana." A rumbling Marcus Miller bassline is framed by Al Foster's drums, Mino Cinelu's urgent percussion, and the funky, dissonant electric guitars of Mike Stern and John Scofield. The interplay between Davis' muted horn and keyboards introduces Bill Evans' fluid soprano sax halfway through. The choppy, repetitive horn vamps amid the jagged group interplay recall Ornette Coleman & Prime Time in places. The other highlight on disc one is the three-part "Celestial Blues." It's lithe and funky, bathed in steamy grooves. Davis -- with and without mute -- freely engages the guitarists as the rhythm section lays a deep cut. Evans' tenor solo in part one is saturated in the influence of Ben Webster. It closes with two unremarkable alternates of Decoy's "Freaky Deaky." Disc's two's highlights include two wonderful alternates of Cyndi Lauper's "Time After Time" (from 1985's You're Under Arrest). The first is uptempo and funky; the latter is three minutes longer with a slow, dubby, reggae processional. A jagged, muscular read of "Theme from Jack Johnson (Right Off)/Intro" offers a killer break from Scofield and punchy, athletic bass from Darryl Jones. In addition to an emotionally poignant version of Michael Jackson's "Human Nature," the disc includes a warm, lyrical, moving read of Tina Turner's "What's Love Got to Do with It" that never made the album. The disc closes with a smoking version of "Katia" featuring an incendiary performance by guitarist John McLaughlin. Both discs are peppered with Davis' studio banter. The live disc is riveting. The band -- Davis, Scofield, Jones, Evans, Foster, and Cinelu -- open with a ramped-up, driving, 13-minute "Speak (That's What Happened)" that sometimes recalls, the unruly voodoo funk on Agharta, albeit in more polished form. Here, "Star People" is loose and airy, offering great solos by guitarist, trumpeter, and saxophonist. "What It Is" offers fiery, interlocking funk as Scofield, Foster, and Jones go head to head. Closer "Code 3" is an excellent showcase for Evans and Cinelu.

There is no question that The Bootleg Series, Vol. 7: That's What Happened 1982-1985 will cause controversy among jazz fans. But it isn't for them. It's for Miles Davis fans and presents an unvarnished taste of him -- from the cutting room floor no less -- attempting to reinvent himself one last time. 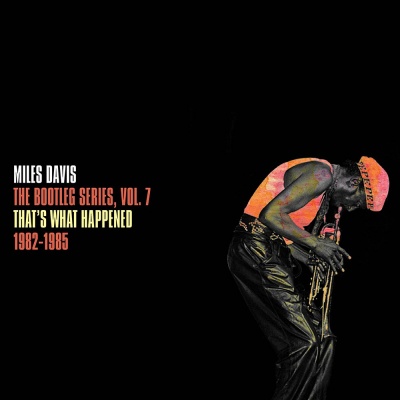