This release should be of special interest to fans of Leonard Bernstein, encompassing not only his first of three official recordings of the Mahler Symphony No. 2 (Resurrection), but two other performances made during moments when Bernstein and Mahler intersected with history. Sony previously released Leonard Bernstein's 1970s London Symphony Orchestra performance of this work, which Bernstein himself preferred, and he later recorded it yet again with the New York Philharmonic on Deutsche Grammophon. This 1963 account with the Philharmonic is special, even if it lacks the sheer urgency of the London recording; by the same token, it displays a flowing lyricism and an overall propulsive force that makes it a far more bracing experience than the later New York recording on DG, and the superior sound makes it preferable to the live London performance.

The Philharmonic had recorded the Symphony No. 2 under the baton of Bruno Walter only five years earlier, and Walter's is still preferable as the broader, more overall rewarding one. But Bernstein's 1963 version is well worth a listen -- his tempo shifts in the first movement are surprising at times, and the richness of the discreet stereo sound is a wonder, the vivid separation of the instruments startling to hear. The music is delineated in exquisite detail by the Philharmonic: the playing of the horns and flutes in the fifth movement, and the singing of the Collegiate Chorale, are all splendid. It would almost be possible to lose sight of the whole amid the detailing of the various parts, if not for the youthful drive of Bernstein's conducting. Walter's is more profound as a recording, but this disc is a good rival.

The accompanying pieces are of even more significant interest to Bernstein's fans: the first part of Mahler's Symphony No. 8, performed at the concert that opened New York's Lincoln Center in 1962; and the Adagietto from the Symphony No. 5, recorded at St. Patrick's Cathedral in New York during the funeral mass for Robert F. Kennedy. The Adagietto is understandably subdued, and is Bernstein's most expansive account of this portion of the symphony. The first section of the Symphony No. 8 is performed and sung in an electrifying manner, in keeping with the moment of the occasion: no performing arts complex like Lincoln Center had ever been seen in the United States before, and amid these surroundings and the V.I.P. audience, all concerned seemed to make every note count. 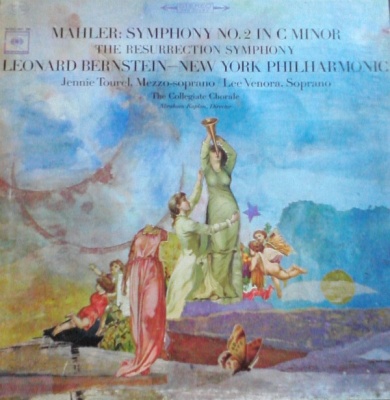