Stravinsky: The Rite of Spring; The Firebird Suite (1919) Review

This is the "Masterworks Expanded Edition" of Leonard Bernstein's Quadrophonic 1972 London Symphony Orchestra recording of Igor Stravinsky's Le Sacre du printemps. It was Bernstein's second go at the work in the studio, the first being made at the tail end of the mono era in January 1958 with the New York Philharmonic. CBS was very heavily into "Quad," and this justified a second recording of Bernstein in Le Sacre du printemps in order to show off the boom and bang of the new system. Whereas the 1972 Sacre is definitely exciting in spots and is a wildly colorful performance, it is also inconsistent in tempo, orchestral balance, and intonation. The percussion and brass parts are really LOUD, however, which may help account for its popularity. The high end is very bright and brittle, and the middle of the orchestral picture is cloudy and clotted; yet other things are good, such as the amazingly long and precisely departing room decay captured at the end of the "Cortège du Sage."

While this is the "Masterworks Expanded Edition," the package doesn't really say what Sony release this is "expanded" from, although it appears to relate to SMK 60694, a deleted Bernstein Century installment that once sold at the same price point. In both instances, the filler consisted of Bernstein's 1957 mono recording of Stravinsky's Firebird Suite, a good performance in which, this time, the brass is a bit too far back and the finale plods rather than strides. The new package "expands" on the Bernstein Century issue by virtue of including his 1964 recording of Scythian Suite, a terrific idea that would've been the right one even the first time around. This is a fabulous performance in Bernstein's best vernacular for Russian music, the only disadvantage being that it's a little weak in the bass, typically so for the New York Philharmonic's Manhattan Center recordings.

What would have been truly "expanded" about this Masterworks Expanded Edition was if they had converted Le Sacre into a Super Audio CD with the Quad sound remixed specifically for home theater systems -- the old Quad recordings of the 1970s work really well in that technological context. Perhaps this would have shed a little light on the muddy mid-range in this Sacre as well. 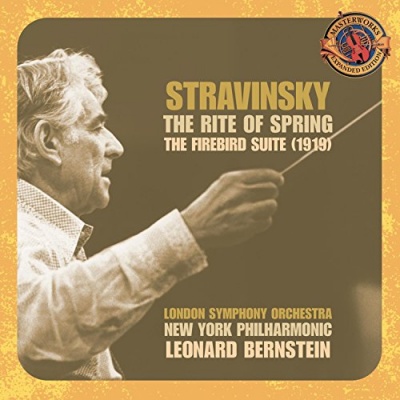 Stravinsky: The Rite of Spring; The Firebird Suite (1919) Album Information