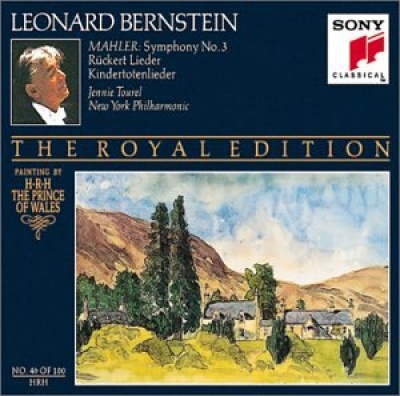 Mahler's Symphony No. 3 has never achieved the popularity of the composer's other works. This is a pity because the six movement symphony, scored for full orchestra, contralto soloist, boys' and women's chorus, is a wonderfully grand paean to nature and is filled with vibrant color and emotion. Completed in 1896, the work looks back to the symphonies of Beethoven and Brahms while also looking forward to the music of Schoenberg and Berg. Typical of Mahler's art are the colorful touches of orchestration that dot the work, such as the haunting posthorn solo in the third movement and contralto solo in the fourth.

On this recording Leonard Bernstein directs the New York Philharmonic Orchestra in a performance that is part of the "Bernstein Century" series on Sony. Bernstein was one of the great Mahler conductors and he brilliantly captures the work's mixture of earthy rowdiness and spiritual yearning. The remainder of the recording is devoted to Mahler's lyrical 'Rückert Lieder' and 'Kindertotenlieder.' The legendary mezzo-soprano Jennie Tourel sings with heart rending emotion in both cycles.