There's revealing diversity in these pre-'West Side Story' works of Bernstein, as well as harbingers of that landmark musical and film. Among them is the dramatic horn work in the title composition, which also certifies the classical chops and sureness in syncopation of jazz clarinetist Benny Goodman. The modernist flurries of the saxophone arrangements are evocative of the much later work by the avant-garde ROVA ensemble.

The 'Fancy Free' ballet appears along with the "Three Dance Episodes" from 'On the Town,' a 1944 show envisioned by Bernstein and choreographer Jerome Robbins as an extension of 'Fancy Free.' The ballet (reproduced here from a monaural recording) presents a remarkable array of emotional dramas - some with Coplandesque bravado, some with Latin touches of tango and fandango, some with the sassy strut which is so Manhattan. The dances showcase Bernstein's facility at reusing and combining themes, some taken from 'On the Town's' most famous number, "New York, New York" (not to be confused with the John Kander-Fred Ebb song of the same name sung by Liza Minelli in the 1977 film "New York, New York"). The composer conducts with vigor.

By contrast, the 'Serenade' lacks the expected Bernstein lyricism and clear, tight structure, but is interesting in concept and shows off the dynamic palate and authority of violinist Zino Francescatti. 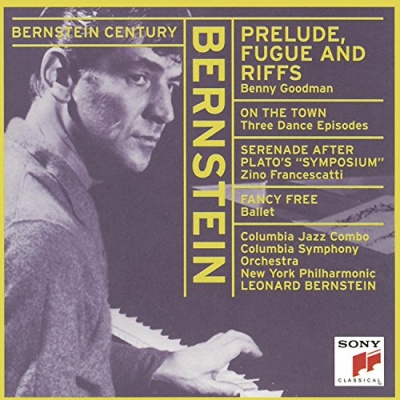