Gershwin: Rhapsody in Blue; An American in Paris Review

Because George Gershwin's Rhapsody in Blue is one of the most beloved American masterpieces, most people who have taken an interest in his music have come to know it quite well and have usually adopted a favorite recording already. Thanks to Sony, its Great Performances series now includes a classic that many will remember vividly -- due in great part to its iconic cover photograph -- and which some will recall fondly as their first introduction to Gershwin's entertaining work. Among American performers who made a splash playing this piece, Leonard Bernstein may not have given the most fastidious, note-perfect performance, but he made this impressive recording with the Columbia Symphony Orchestra in 1959 a true reflection of his charismatic, flamboyant personality. Paired with his buoyant 1958 performance of An American in Paris with the New York Philharmonic, Bernstein's rendition of Rhapsody is lively, flashy, bluesy, and intensely romantic in feeling, and these positive characteristics no doubt contributed to keeping this album in print for many years as one of Columbia's great successes. Presented here with a bonus recording of Gershwin's Concerto in F, performed in 1960 by pianist André Previn with Andre Kostelanetz and his Orchestra, the package is practically irresistible for any Gershwin fan who wants a maximum return for the affordable reissue price. Sony's remastering with direct stream digital has made these recordings sound remarkably fresh with almost no trace of hiss or other noises, and this album favorably compares with many all-digital CDs in its clarity and color. 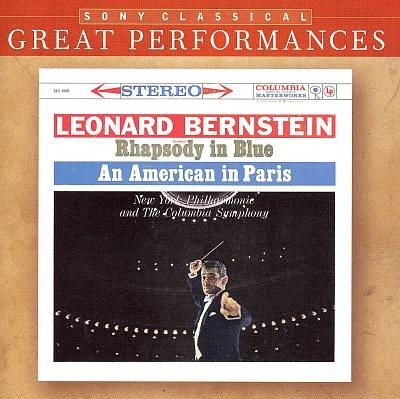 Gershwin: Rhapsody in Blue; An American in Paris Album Information