Active throughout his long lifetime, Samuel Barber was one of a group of American composers whose musical ideals seemed to focus on the aesthetics of the Romantic era rather than seeking to define a uniquely American style in the manner of Copland, Gershwin, or even Bernstein. His penchant for Romanticism, lush orchestration, and soaring melody secured a position of respect and admiration throughout his lifetime and into the present. This 2009 Sony reissue presents two of Barber's three main concertos along with three of the shorter orchestral works that catapulted his career. The disc opens with a 1964 recording of the Violin Concerto performed by Isaac Stern with the New York Philharmonic under Leonard Bernstein. This particular performance, though essentially solid, is one of more interest to historical recording fans than first-time listeners. Stern's playing is just not as lush, connected, or effortless as it needs to be. The Presto finale is taken at a rather leisurely, unexciting tempo. Hilary Hahn and the Saint Paul Chamber Orchestra provide a superior alternative. The program continues with a 1964 performance of the Piano Concerto with John Browning (who premiered the work) with the Cleveland Orchestra and George Szell. The Barber concerto has long been one of Browning's trademark works and commands the work as much now as he did in the '60s. Here again, though, more modern recordings (the release with Leonard Slatkin and the Saint Louis Symphony in particular) offer a more vibrant, lush sound quality. Eugene Ormandy and the Philadelphia Orchestra achieve this warmth and richness in their 1957 performance of the Adagio for strings and the New York Philharmonic's playing of the Second Essay and the Overture for the School for Scandal is equally committed. 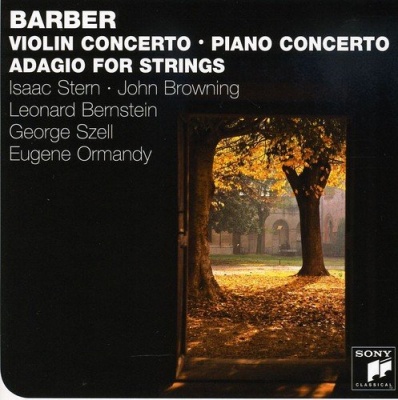