Candide, as a musical/opera, has a highly complex history, having gone through multiple alterations since it first premiered in 1956 with a book by Lillian Hellman. In the 1974 version, the book was rewritten by Hugh Wheeler (as adapted from Voltaire and at the insistence of director Hal Prince) with added humor, ultimately saving it from being a complete disaster by some accounts. In any case, the music is by Leonard Bernstein with lyrics by Richard Wilbur -- although additional lyrics are contributed by John Latouche, Dorothy Parker, Lillian Hellman, Bernstein, Stephen Sondheim, and John Wells. The 1956 version took itself too seriously, with Hellman attempting to make political statements with the admittedly sardonic Voltaire novelette. This recording is especially worthwhile in contrast to the far more publicized version written by Wheeler. For those who would prefer a more serious take on the musical, this recording is well done, and Bernstein's glorious score shines as usual. 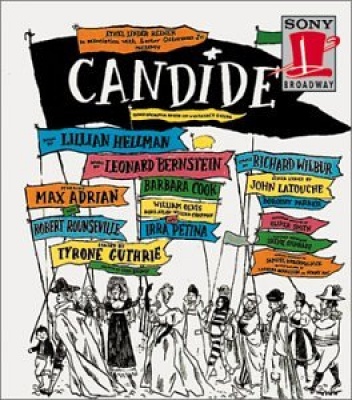