Previously available as part of the "Bernstein Century" series but reissued in 2004 in the Masterworks Expanded Edition, this album of Dvorák's Symphony No. 9, "From the New World," Carnival Overture, and the Slavonic Dances Nos. 1 and 3 is enriched with bonus tracks of Smetana's Overture and Dances (3) from The Bartered Bride. Despite Bernstein's hyperactive conducting and some scrappy playing in places from the New York Philharmonic, these are examples of the most lively music they produced together in the early '60s. The symphony is truly exciting and almost overwhelming in this vigorous interpretation, and the orchestra pours out all its energy where it counts. Bernstein may be criticized for excessive speed, but his drive keeps the musicians attentive and, for the most part, accurate. Things are less tidy in the rushed Carnival Overture and the scurrying Overture to The Bartered Bride, but the NYP is full of vitality and brings off these pieces with great panache. Smetana's Polka, Furiant, and the "Dance of the Comedians" are the most charming tracks, and good choices as filler. Remastered with Direct Stream Digital and SBM Direct, the analog recordings sound better than ever, with a much fuller bass than the original LPs provided. 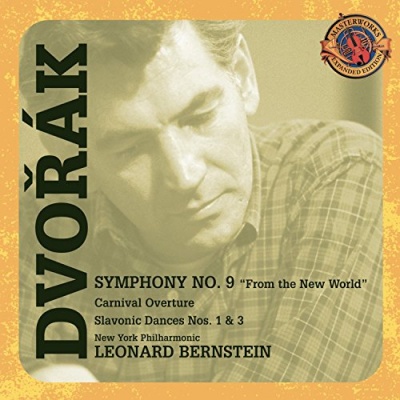