Somewhere in the past year, Celine Dion thought it a good idea to strip down from the anthemic pomposity of her last few works, which were rife with ballads custom-made for the adult contemporary charts. Perhaps it was the lukewarm reception to her last record that spawned this realization, but whatever the reason may be, 1 Fille & 4 Types is a record that many Dion fans were hoping would arrive one day. Her vocals are back at top of their game: gone are the majority of the near-patented diva hysterics and howls and arriving in their place is a voice that values dynamics over acrobatics. The band is stripped down (comparatively) to its bare essentials, taking Dion into relatively unfamiliar territories such as country-pop and folk, and she proves herself more than up to the task of delivering top-notch performances every time. This stripped-down, back-to-basics attitude is only further reinforced within the album's packaging: Dion in several fashionably rugged poses that could have come straight from an Abercrombie & Fitch catalog complete with photos of a rugged life "on the road," including a hysterical shot of her with the band all lying on a bed together with her hair up in a towel and the air conditioner apparently not working during the summertime. It's completely premeditated and no diva in her right mind would stand for such living conditions, but this only reinforces how far away Dion wants to distance herself from her image this time around. The pop songs are on par with some of Diane Warren's finest gifts to diva Dion, and are equally as infectious as they are hummable. To some, it may be a stumbling block that the album is sung entirely in French, but look beyond that and find a no-frills Dion getting back to pop basics and performing at a level unheard in a while. Yes, it's in French, but hopefully the record will merit enough attention to warrant an English version sometime in the near future. 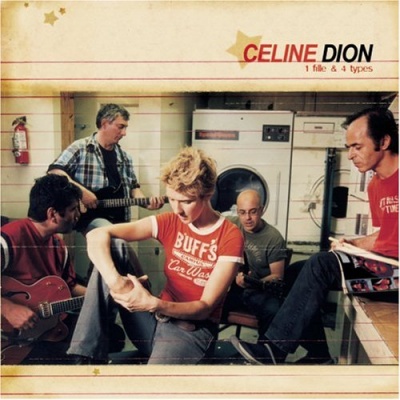