Her first English-language effort following a pair of mid-decade personal tragedies, Celine Dion's 12th set Courage is a transformative, cathartic release for the powerhouse vocalist that carries listeners through her process of healing and moving on. While the deaths of her husband and brother inform much of the album, they do not completely define it. Rather, Dion's phoenix-from-the-ashes power shines and reveals a confident rebirth as she rebuilds life and reclaims herself. Paired with its intentionally uplifting French-language predecessor, 2016's Encore un Soir, Courage continues to track Dion's grief, just with a contemporary pop angle. While the comforting Encore was suffused with traditional pop-guitar backing, Courage grasps the spirit of the late 2010s with vigor, recruiting a team of co-writers including David Guetta and Skylar Grey. Producers LAUV, DallasK, Greg Kurstin, and the Stereotypes also liven up the affair by injecting the album with throwback R&B ("How Did You Get Here"), soulful gospel ("I Will Be Stronger"), electronic dance ("Flying on My Own"), and even country-pop ("The Chase"). Sia, in particular, makes an indelible impact. The last time they worked together was on the title track from 2013's Loved Me Back to Life. Here, she stamps her brand onto a pair of highlights (a third is found on the deluxe edition) and their spirits entwine to such an extent that even on tracks where they are separated (like "Lovers Never Die" and "Change My Mind"), Dion affects Sia's vocal stylings and makes them her own. Indeed, Dion's vocal acrobatics remain in fine form and, no matter who is sharing the credits, every moment belongs to Dion.

Courage is buffered by a heavy dose of mid-tempo bloodletting that serves as therapeutic processing for herself (and as vulnerable confessionals to her fans). That inimitable voice soars throughout, but it reaches an album peak on the shiver-inducing title track. Sung directly to her late husband, René Angélil, the sweeping ballad is the heart of the set, a vulnerable and emotionally resonant conversation that is both a tearjerker and a showstopper. Similarly heartbreaking moments appear elsewhere, which Dion is sure to balance with moving, up-tempo anthems centered on rebirth and moving on with life. After over 20 years of marriage, Dion is suddenly free and single, finding new love and embracing middle age with confidence and maturity. These heartwarming moments are fascinating to hear, especially from someone who has been in the limelight since the late '70s. Dion opens herself to new things on "Say Yes," works on her self-confidence with "Imperfections," and bravely allows someone new into her heart with "Falling in Love Again." With unprecedented access and insight into Dion's world following such a life-changing few years, Courage is a triumph of spirit and resolve. 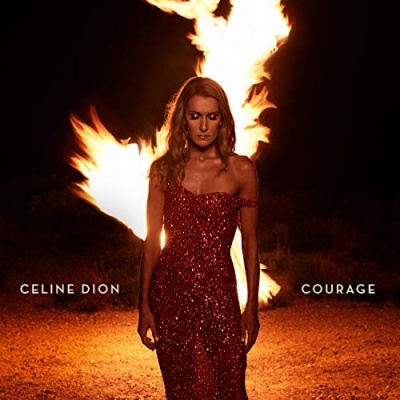