Preserving newly written Bob Dylan songs for copyright is the reason why the Band's Garth Hudson rolled tape at Big Pink but The Basement Tapes were something much more than songwriting demos. Greil Marcus dubbed it a celebration of the "Old, Weird America" in his 1997 book Invisible Republic, connecting these songs to Harry Smith's Anthology of American Folk Music, adding an extra layer of myth to tapes that were shrouded in mystery from the moment bootlegs started to circulate. The Basement Tapes Complete strengthens portions of that legend while simultaneously puncturing it. Certainly, the six-disc box -- its first five discs assembled according to Hudson's numbering system, with the sixth disc collecting sessions discovered later -- feels substantially different from the LP released in 1975, where the overall picture was distorted by Robbie Robertson adding sometimes significant overdubs and including Band recordings that weren't cut during those seven months in 1967. This is not a minor thing. These sly revisions gave the 1975 album a slight veneer that's been stripped away by this unfussy, startlingly clear remastering, but the big difference is that the chronological sequence on The Basement Tapes Complete gives the set a narrative. The first two discs are the band warming up, playing a bunch of old songs that are often of more recent vintage than the Old, Weird America reputation suggests -- there's a clutch of Johnny Cash songs, a couple from Ian Tyson, a song apiece from Hank Williams, John Lee Hooker, Curtis Mayfield, and Dallas Frazier, a cross-section that underscores how this was the birth of what would be called Americana -- and then on the second two discs, Dylan starts tying these disparate strands together on his originals. Many of these songs, usually the wildest and wooliest, showed up in 1975, so the news here are the sometimes quite different alternate takes and the major tunes that have been bootlegged widely over the years: the ghostly "I'm Not There," the winding modern spiritual "Sign on the Cross," the rambling, vulgar blues "Get Your Rocks Off," and the even wilder "Bourbon Street." These songs are necessary additions to the canon, but what gives The Basement Tapes their real resonance is the stuff that happens in the margins. It's the half-remembered covers, it's sterling throwaways like "Silent Weekend," it's Dylan turning his early songs upside down, it's hearing Bob and the Band stumble around as they're trying to find a groove. This is the wondrous thing about The Basement Tapes: this is music made with no expectation that anybody outside of a small circle would ever hear it. Of course, the opposite happened. The Basement Tapes leaked out and became an enduring part not only of the legacy of both Dylan and the Band, but also of American music as a whole, as it stood at the crossroads of so many different strands of American culture. 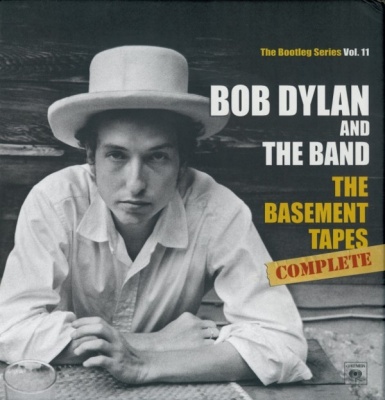