Together Through Life Review

By all accounts, Together Through Life arrived quickly, cut swiftly by Bob Dylan and his touring band in the fall of 2008, surprising the label upon its delivery a couple months later, then rushed into stores in April 2009, just half a year after the release of the monumental archive project Tell Tale Signs. Given the speed of its creation, it fits that the album has a spontaneous, kinetic kick, feeling so alive that it's a little messy, teeming with contradictions, crossed signals, and frayed ends. That liveliness turns Together Through Life into a much lighter affair than its weighty predecessor, Modern Times, which was tinged with doom and had thematic unity, two things missing from this comparatively breezy affair. If Together Through Life is about any one thing, it is -- as its title and cover photo elliptically suggest -- the enduring power of romance, how it provides sustenance and how its absence can make life hard. But all this suggests that Dylan has turned in a meditation on the meaning of life and love here, when its core charm is its very modesty. It's an old-fashioned ten tracks, clocking in at 45 minutes, a simple set of songs co-written with Robert Hunter -- Jerry Garcia's lyricist and previous Dylan collaborator, co-writing the irresistibly jaunty "Silvio" in 1988 -- and delivered without adornment, its clean yet earthy production slyly emphasizing the musical variety here. Sonically, this is right in line with Dylan's 2000s albums, the sound of a well-lubricated traveling band easing into the same chords it plays every night, but this isn't strictly roadhouse rock & roll: Dylan remains fixated on pre-rock & roll American music, emphasizing the blues but eager to croon love-struck ballads. In this context, David Hidalgo's accordion -- which appears so often it soon ceases to be noteworthy -- can suggest a romantic stroll down Parisian streets or a steamy sojourn with Doug Sahm in a Tex-Mex border town, but everything here is recognizably, thoroughly Dylan's mythic picturesque America that stretches from the hazy past to the barbed present. While the music is proudly, almost defiantly, rooted in the past, with Dylan borrowing Willie Dixon's "I Just Want to Make Love to You" wholesale for the riotous "My Wife's Home Town," there's no avoidance of the present here, with Bob even going so far as to turn the omnipresent catch phrase "It's All Good" into a mordantly funny rocker. Dylan's not just aware of the modern-day vernacular, he's wound up with an album that fits the spirit of 2009: it's troubled but hopeful, firmly in favor of love and romance, but if that fails there are always romantic dreams and sardonic jokes to get you through life. 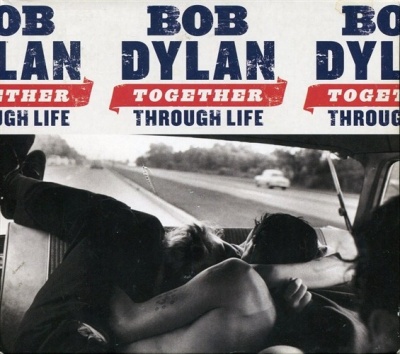 Together Through Life Album Information