When Bob Dylan dropped Time Out of Mind in 1997, it was a rollicking rockabilly and blues record, full of sad songs about mortality, disappointment, and dissolution. 2001 brought Love and Theft, which was also steeped in stomping blues and other folk forms. It was funny, celebratory in places and biting in others. Dylan has been busy since then: he did a Victoria's Secret commercial, toured almost nonstop, was in a couple films -- Larry Charles' Masked and Anonymous and Martin Scorsese's documentary No Direction Home -- and published the first of a purported three volumes of his cagey, rambling autobiography, Chronicles. Lately, he's been thinking about Alicia Keys. This last comment comes from the man himself in "Thunder on the Mountain," the opening track on Modern Times, a barn-burning, raucous, and unruly blues tune that finds the old man sounding mighty feisty and gleefully agitated: "I was thinkin' 'bout Alicia Keys/Couldn't keep from cryin'/She was born in Hell's Kitchen and I was livin' down the line/I've been lookin' for her even clear through Tennessee." The drums shuffle with brushes, the piano is pumping like Jerry Lee Lewis, the bass is popping, and a slide guitar that feels like it's calling the late Michael Bloomfield back from 1966 -- à la Highway 61 Revisited -- slips in and out of the ether like a ghost wanting to emerge in the flesh. Dylan's own choppy leads snarl in the break and he's letting his blues fall down like rain: "Gonna raise me an army, some tough sons of bitches/I'll recruit my army from the orphanages/ I've been to St. Herman's church and said my religious vows/I sucked the milk out of a thousand cows/I got the pork chop, she got the pie/She ain't no angel and neither am I...I did all I could/I did it right there and then/I've already confessed I don't need to confess again."

Thus begins the third part of Dylan's renaissance trilogy (thus far, y'all). Modern Times is raw; it feels live, immediate, and in places even shambolic. Rhythms slip, time stretches and turns back on itself, and lyrics are rushed to fit into verses that just won't stop coming. Dylan produced the set himself under his Jack Frost moniker. Its songs are humorous and cryptic, tender and snarling. What's he saying? We don't need to concern ourselves with that any more than we had to Willie Dixon talking about backdoor men or Elmore James dusting his broom. Dylan's blues are primitive and impure. Though performed by a crackerjack band, they're played with fury; the singer wrestles down musical history as he spits in the eye of the modern world. But blues isn't the only music here. There are parlor songs such as "Spirit on the Water," where love is as heavenly and earthly a thing as exists in this life. The band swings gently and carefree, with Denny Freeman and Stu Kimball playing slippery -- and sometimes sloppy -- jazz chords as Tony Garnier's bass and George Receli's sputtering snare walk the beat. Another, "When the Deal Goes Down," tempts the listener into thinking that Dylan is aping Bing Crosby in his gravelly, snake-rattle voice. True, he's an unabashed fan of the old arch mean-hearted crooner. But it just ain't Bing, because it's got that true old-time swing.

Dylan's singing style in these songs comes from the great blues and jazzman Lonnie Johnson (whose version of the Grosz and Coslow standard "Tomorrow Night" he's been playing for years in his live set). If you need further proof, look to Johnson's last recordings done in the late '50s and early '60s ("I Found a Dream" and "I'll Get Along Somehow"), or go all the way back to the early years for "Secret Emotions," and "In Love Again," cut in 1940. It is in these songs where you will find the heart of Dylan's sweet song ambition and also that unique phrasing that makes him one of the greatest blues singers and interpreters ever. Dylan evokes Muddy Waters in "Rollin' and Tumblin." He swipes the riff, the title, the tune itself, and uses some of the words and adds a whole bunch of his own. Same with his use of Sleepy John Estes in "Someday Baby".. Those who think Dylan merely plagiarizes miss the point. Dylan is a folk musician; he uses American folk forms such as blues, rock, gospel, and R&B as well as lyrics, licks, and/or whatever else he can to get a song across. This tradition of borrowing and retelling goes back to the beginning of song and story. Even the title of Modern Times is a wink-eye reference to a film by Charlie Chaplin. It doesn't make Dylan less; it makes him more, because he contains all of these songs within himself. By his use of them, he adds to their secret histories and labyrinthine legends. Besides, he's been around long enough to do anything he damn well pleases and has been doing so since the beginning.

Modern Times expresses emotions and comments upon everything from love ("When the Deal Goes Down," "Beyond the Horizon") to mortality ("The Levee's Gonna Break," "Ain't Talkin") to the state of the world -- check "Workingman's Blues #2," where Dylan sings gently about the "buyin' power of the proletariat's gone down/Money's getting shallow and weak...they say low wages are reality if we want to compete abroad." But in the next breath he's put his "cruel weapons on the shelf" and invites his beloved to sit on his knee. It's a poignant midtempo ballad that walks the line between the topical songs of Cisco Houston and Woody Guthrie to the love songs of Stephen Foster and Leadbelly. One can feel both darkness and light struggling inside the singer for dominance. But in his carnal and spiritual imagery and rakish honesty, he doesn't give in to either side and walks the hardest path -- the "long road down" to his own destiny. This is a storyteller, a pilgrim who's seen it all; he's found it all wanting; he's found some infinitesimal take on the truth that he's holding on to with a vengeance. In the midst of changes that are foreboding, Modern Times is the sound of an ambivalent Psalter coming in from the storm, dirty, bloodied, but laughing at himself -- because he knows nobody will believe him anyway.

Dylan digs deep into the pocket of American song past in "Nettie Moore," a 19th century tune from which he borrowed the title, the partial melody, and first line of its chorus. He also uses words by W.C. Handy and Robert Johnson as he extends the meaning of the tome by adding his own metaphorical images and wry observations. However, even as the song is from antiquity, it's full of the rest of Modern Times bemusement. "The Levee's Gonna Break" shakes and shimmies as it warns about the coming catastrophe. Coming as it does on the anniversary of Hurricane Katrina, it's a particularly poignant number that reveals apocalypse and redemption and rails on the greedy and powerful as it parties in the gutter. There are no sacred cows -- when Dylan evokes Carl Perkins' exhortation to put "your cat clothes on," it's hard not to stomp around maniacally even as you feel his righteousness come through. The great irony is in the final track, "Ain't Talkin'," where a lonesome fiddle, piano, and hand percussion spill out a gypsy ballad that states a yearning, that amounts to an unsatisfied spiritual hunger. The pilgrim wanders, walks, and aspires to do good unto others, though he falters often -- he sometimes even wants to commit homicide. It's all part of the "trawl" of living in the world today. Dylan's simmering growl adds a sense of apprehension, of whistling through the graveyard, with determination to get to he knows not where -- supposedly it's the other side of the world. The guitar interplay with the fiddle comes through loud and clear in the bittersweet tune. It's like how "Beyond the Horizon" uses gypsy melodies and swing to tenderly underscore the seriousness in the words. It sends the album off with a wry sense of foreboding. This pilgrim is sticking to the only thing he knows is solid -- the motion of his feet.

Modern Times portrays a new weird America, even stranger than the old one, because it's merely part of a world consumed by insanity. In these ten songs, bawdy joy, restless heartache, a wild sense of humor, and bottomless sadness all coexist and inform one another as a warning and celebration of this precious human life while wondering openly about what comes after. This world view is expressed through musical and lyrical forms that are threatened with extinction: old rickety blues that still pack an electrically charged wallop, porch and parlor tunes, and pop ballads that could easily have come straight from the 1930s via the 1890s, but it also wails and roars the blues. Modern Times is the work of a professional mythmaker, a back-alley magician, and a prophetic creator of mischief. He knows his characters because he's been them all and can turn them all inside out in song: the road-worn holy man who's also a thief; the tender-hearted lover who loves to brawl; the poetic sage who's also a pickpocket; and the Everyman who embodies them all and just wants to get on with it. On Modern Times, all bets are off as to who finishes the race dead last, because that's the most interesting place to be: "Meet me at the bottom, don't lag behind/Bring me my boots and shoes/You can hang back or fight your best on the frontline/Sing a little bit of these workingman blues." There is nothing so intriguing as contradiction and Dylan offers it with knowing laughter and tears, because in his songs he displays that they are both sides of the same coin and he never waffles, because he's on the other side of the looking glass. Modern Times is the work of an untamed artist who, as he grows older, sees mortality as something to accept but not bow down to, the sound that refuses to surrender to corruption of the soul and spirit. It's more than a compelling listen; it's a convincing one. 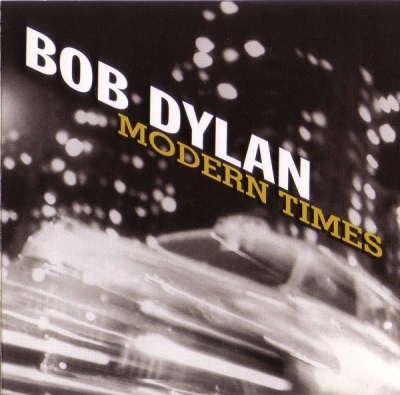