The Ties That Bind: The River Collection Review

Bruce Springsteen's ambition is his blessing and his curse. He's always believed that rock & roll is a music that can express people's deepest hopes and dreams and change their lives, and his best work communicates that brilliantly. But Springsteen often seems to doubt his own abilities and struggles under the weight of his own (high) standards, and many of Springsteen's best albums were painstakingly created as he spent months in the studio, searching for the right set of songs and performances that would tell the larger story in his mind. Springsteen is too smart to believe you can will a masterpiece into creation, but he does have a work ethic that suggests nothing worthwhile comes without sweat and sore muscles, and the man who regularly plays energetic three-hour shows has never hesitated to do whatever it takes to get the details just right in the studio, even if the desire is to create something that sounds explosive and spontaneous. After taking his early urban folk tales of cars and girls as far as he could on Born to Run, Springsteen took a long, hard look at the lives of those same kids, now saddled with adult responsibilities and realizing that the American Dream was increasingly out of their grasp, on 1978's Darkness on the Edge of Town. With 1980's The River, Springsteen sought to expand on those themes while also offering more of the tough, bar-band rock that was his trademark (and often conspicuous in its absence on Darkness), and by the time it was released it had swelled into Springsteen's first two-LP set. After presenting his fans with a grand-scale study of how Darkness on the Edge of Town came into being on the 2010 box set The Promise, Springsteen does the same for The River with The Ties That Bind: The River Collection, which features a newly remastered edition of the original album along with a bonus disc of outtakes (most previously unreleased) and an early single-LP version of the album that Springsteen opted not to release because it failed to tell the story he had envisioned. The short version sounds like the rough draft that it is, though it also includes several songs that didn't appear on the longer final version ("Loose Ends" and "To Be True" in particular are superb songs that simply didn't fit the flow of the album), as well as different versions of a few tracks that do ("The Ties That Bind" contains different lyrics, while "Stolen Car" and "You Can Look [But You Better Not Touch]" feature different arrangements). And the outtakes disc offers 22 variations on the album's themes that point to any number of directions the album could have gone, and if nothing else it says a great deal about Springsteen that he had enough good songs that numbers as strong as "Party Lights," "Roulette," "Where the Bands Are," and "Chain Lightning" could end up on the shelf. The Ties That Bind also includes a documentary (on DVD or Blu-ray) on the making of the album, as well as a full concert filmed in 1980 that finds Springsteen & the E Street Band in incendiary form. The Ties That Bind: The River Collection, like a high-profile DVD release of the 2000s, is more about the bonus features than the main feature, but the extras lend an invaluable perspective to one of the most important works in Springsteen's catalog, and this set makes it possible to imagine the many chapters that could have been added or removed from the album while still telling the same powerful story, as well as documenting the thought and effort Springsteen put into the process. 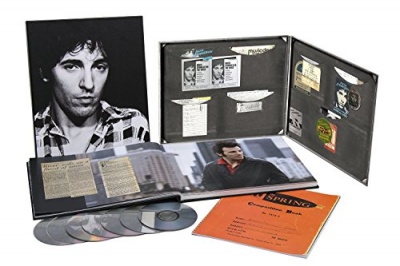 The Ties That Bind: The River Collection Album Information