We Shall Overcome: The Seeger Sessions Review

We Shall Overcome: The Seeger Sessions is an unusual Bruce Springsteen album in a number of ways. First, it's the first covers album Springsteen has recorded in his three-decade career, which is a noteworthy event in itself, but that's not the only thing different about We Shall Overcome. Springsteen, a notorious perfectionist who has been known to tweak and rework albums numerous times before releasing them (or scrapping them, as the case may be), pulled together the album quickly, putting aside a planned second volume of the rarities collection Tracks after discovering a set of recordings he made in 1997 for a Pete Seeger tribute album called Where Have All the Flowers Gone: The Songs of Pete Seeger. Enthralled by this handful of tracks -- one of which, "We Shall Overcome," appeared on the tribute -- Springsteen decided to cut a whole album of folk tunes popularized by Pete Seeger. He rounded up 13 musicians, including some who played on those 1997 sessions, and did two one-day sessions in late 2005 and early 2006, swiftly releasing the resulting album that April. As Bruce stresses in his introductory liner notes, these were live recordings, done with no rehearsals, and We Shall Overcome does indeed have an unmistakably loose feel, and not just because you can hear the Boss call out chord changes in a handful of songs. This music is rowdy and rambling, as the group barrels head-first into songs that they're playing together as a band for the first time, and it's hard not to get swept up along in their excitement. Springsteen has made plenty of great records, but We Shall Overcome is unique in its sheer kinetic energy; he has never made a record that feels as alive as this.

Not only does We Shall Overcome feel different than Bruce's work; it also feels different than Seeger's music. Most of Seeger's recordings were spare and simple, featuring just him and his banjo; his most elaborately produced records were with the Weavers, whose recordings of the '50s did feature orchestration, yet that's a far cry from the big folk band that Springsteen uses here. Bruce's combo for the Seeger sessions has a careening, ramshackle feel that's equal parts early-'60s hootenanny and Bob Dylan and the Band's Americana; at times, its ragged human qualities also recall latter-day Tom Waits, although the music here is nowhere near as self-consciously arty as that. Springsteen has truly used Seeger's music as inspiration, using it as the starting point to take him someplace that is uniquely his own in sheer musical terms. Given that, it should be no great surprise that Bruce also picks through Seeger's songbook in a similar fashion, leaving many (if not most) of Pete's well-known songs behind in favor of a selection of folk standards Springsteen learned through Seeger's recordings. (Author/critic Dave Marsh researched the origins of each song here; there are brief introductions within the album's liner notes and thorough histories presented on the official Springsteen site.) While the songs featured here adhere to no one specific theme -- there are work songs, spirituals, narratives, and protest songs -- it is possible to see this collection of tunes as Springsteen's subtle commentary on the political state of America, especially given Seeger's reputation as an outspoken political activist, but this record should hardly be judged as merely an old-fashioned folk record. We Shall Overcome is many things, but a creaky relic is not one of them. Springsteen has drawn from Seeger's songbook -- which he assembled in the '40s, '50s, and '60s from traditional folk songs -- and turned it into something fresh and contemporary. And even if you have no patience for (or interest in) the history of the songs, or their possible meanings, it's easy to enjoy We Shall Overcome on pure musical terms: it's a rambunctious, freewheeling, positively joyous record unlike any other in Springsteen's admittedly rich catalog.

[We Shall Overcome: The Seeger Sessions was released in the U.S. as a DualDisc, containing a CD on one side and a DVD on the other. The CD side merely contains the album. The DVD contains the album in PCM stereo (there's no 5.1 mix, although given the big-band nature of this session, this album would have sounded great in Surround Sound), along with two bonus tracks, the rollicking "Buffalo Gals" and the moody, soulful "How Can I Keep from Singing." Both bonus cuts are excellent and should have been on the album proper. There is also a 30-minute video program that chronicles some of the recording of the album, but it's not a documentary: it's more of a performance film with commentary, and while it could have been longer or had more commentary, it's still quite enjoyable. Finally, We Shall Overcome also was released separately as a vinyl LP.] 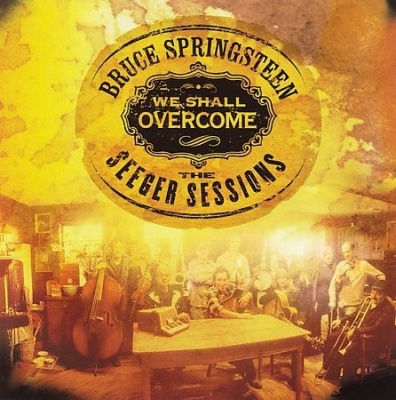 We Shall Overcome: The Seeger Sessions Album Information

Hanging Out The Great Outdoors