Heavy lies the crown on Bruce Springsteen's head. Alone among his generation -- or any subsequent generation, actually -- he has shouldered the burden of telling the stories of the downtrodden in the new millennium, a class whose numbers increase by the year, a fact that weighs on Springsteen throughout 2012's Wrecking Ball. Such heavy-hearted rumination is not unusual for the Boss. Ever since The Rising, his 2002 return to action, a record deliberately tailored to address the lingering anger and sorrow from 9/11, Springsteen has eschewed the frivolous in favor of the weighty, escalating his dry, dusty folk and operatic rock in tandem, all in hopes of pushing the plight of the forgotten into public consciousness. Each of his five albums since The Rising have been tailored for the specific political moment -- Devils & Dust ruminated over forgotten Americans in the wake of the Iraq war; We Shall Overcome: The Seeger Sessions was an election year rallying call; Magic struggled to find meaning in these hard times; Working on a Dream saw hope in the dawning days of Obama -- and it’s no mistake that Wrecking Ball fuses elements of all four into an election year state of the union: Bruce is taking stock of where we are and how we’ve gotten here, urging us to push forward. If that sounds a bit haughty, it also plays that way. Springsteen has systematically removed any element of fun -- "Mary’s Place" is the only original in the past decade that could be called a party song -- along with all the romance or any element of confessional songwriting. He has adopted the mantle of the troubadour and oral historian, telling tales of the forgotten and punctuating them with rallying calls to action. Wrecking Ball contains more of the latter than any of its predecessors, summoning the masses to rise up against fatcat bankers set to singalongs lifted from Seeger. There's an unshakable collectivist hootenanny feel on Wrecking Ball, not to mention allusions to gospel including a borrowed refrain from "This Train," but Springsteen takes pains to have the music feel modern, inviting Tom Morello to do aural paintings with his guitar, threading some trip-hop rhythms into the mix, and finding space for a guest rap on "Rocky Ground." As admirable as the intent is, the splices between old-fashioned folk protests and dour modernity become too apparent, possibly because there's so little room to breathe on the album -- the last recorded appearance of Clarence Clemons helps lift "Land of Hope and Dreams" above the rest -- possibly because the message has been placed before the music. Springsteen is so focused on preaching against creeping inequality in the U.S. that he's wound up honing his words and not his music, letting the big-footed stomps and melancholy strumming play second fiddle to the stories. Consequently, Wrecking Ball feels cumbersome and top heavy, Springsteen sacrificing impassioned rage in favor of explaining his intentions too clearly. 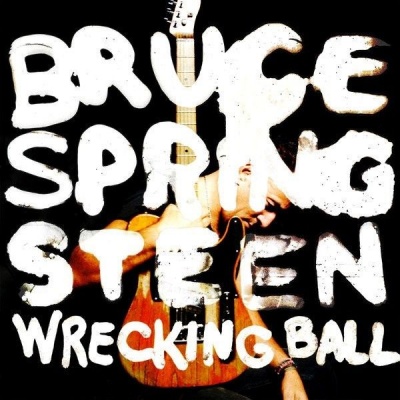