Bruce Springsteen chose not to tour behind Western Stars, the lush album he released at the start of the summer of 2019. Instead, he decided to underscore its cinematic undercurrent by releasing a film documenting a performance of the album's songs recorded with a full orchestra in an old barn. In the film, the songs are punctuated by stories and narration from Bruce, but the soundtrack album merely replicates the running order of the studio album, adding a cover of Glen Campbell's "Rhinestone Cowboy" as an elegiac closer (its key line "there's been a load of compromisin'/on the road to my horizon" could be sung by any of Bruce's characters on Western Stars). Springsteen reportedly labored over Western Stars for years, so it's not surprising that the arrangements on Western Stars: Songs from the Film essentially mimic those on the studio set; not only did he get those tunes right on record, he was out promoting the album. Because of this, Western Stars: Songs from the Film doesn't pack a wallop, but it does have its own distinct vibe, largely due to his vocal performance. On the studio set, he can soar with grace, but here Springsteen seems a little weathered -- a tonal texture that suits his bittersweet tunes, and also lends itself well to the occasional harmony from Patti Scialfa. Springsteen's earthy phrasing helps ground these songs and makes for an intriguing, occasionally moving complement to the main album. 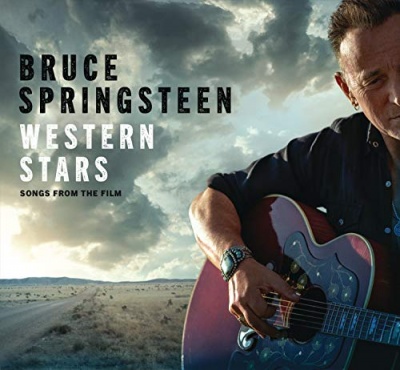