Every decade or so, Bruce Springsteen releases a somber album of narrative songs, character sketches, and folk tunes -- records that play not like rock & roll, but rather as a collection of short stories. Nebraska, released in the fall of 1982 during the rise of Reagan's America, was the first of these, with the brooding The Ghost of Tom Joad following in 1995, in the thick of the Clinton administration but before the heady boom days of the late '90s. At the midpoint of George W. Bush's administration, Springsteen released Devils & Dust, another collection of story songs that would seem on the surface to be a companion to Nebraska and Ghost, but in actuality is quite a different record than either. While the characters that roam through Devils & Dust are similarly heartbroken, desperate, and downtrodden, they're far removed from the criminals and renegades of Nebraska, and the album doesn't have the political immediacy of Ghost's latter-day Woody Guthrie-styled tales -- themes that tied together those two albums. Here, the songs and stories are loosely connected. Several are set in the West, some are despairing, some have signs of hope, a couple are even sweet and light. Springsteen's writing is similarly varied, occasionally hearkening back to the spare, dusty prose of Nebraska, but often it's densely composed, assured, and evocative, written as if the songs were meant to be read aloud, not sung. But the key to Devils & Dust, and why it's his strongest record in a long time, is that the music is as vivid and varied as the words. Unlike the meditative, monochromatic The Ghost of Tom Joad, this has different shades of color, so somber epics like "The Hitter" or the sad, lonely "Reno" are balanced by the lighter "Long Time Comin'," "Maria's Bed," and "All I'm Thinkin' About," while the moodier "Black Cowboys" and "Devils & Dust" are enhanced by subtly cinematic productions. It results in a record that's far removed in feel from the stark, haunting Nebraska, but on a song-for-song level, it's nearly as strong, since its stories linger in the imagination as long as the ones from that 1982 masterpiece (and they stick around longer than those from Ghost, as well). Devils & Dust is also concise and precisely constructed, two things the otherwise excellent 2002 comeback The Rising was not, and that sharp focus helps make this the leanest, artiest, and simply best Springsteen record in many years. [Devils & Dust was released only as a DualDisc, a disc that contains a CD on one side and a DVD on the flip. The DVD contains a 5.1 mix of the album, plus a 30-minute film containing interviews with Springsteen and footage of him performing five songs live in the upstairs of a house; in other words, it's a staged performance, not a concert. The interviews are enjoyable, if not particularly interesting, while the live acoustic performances are not strictly unadorned -- "Reno" has pianos and synthesizers discreetly murmuring in the background, "All I'm Thinkin' About" has synths and backing vocals. It's a fine little film, but not something that merits frequent repeat viewings. The CD side appears to be copy-protected -- it did not read in either a PC with Windows XP or a Mac with OSX, so it cannot easily be ripped as MP3s.] 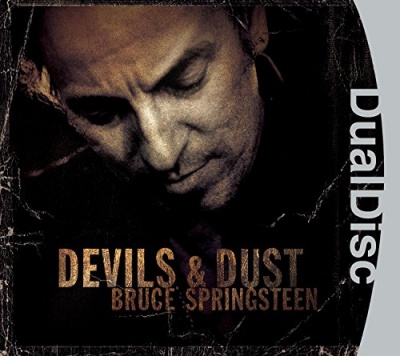