The Greatest Songs of the Fifties Review

A kind of a variation on Clive Davis' wildly successful American Classic Songbook albums for Rod Stewart, The Greatest Songs of the Fifties finds Barry Manilow singing vocal pop favorites of the Eisenhower era. Although there are songs that are indeed classics of the rock & roll era, there is no rock & roll here. Manilow has picked songs like "Venus," "Are You Lonesome Tonight?," "All I Have to Do Is Dream," and "Unchained Melody" (which originated in the '50s, but the Righteous Brothers had the biggest hit with it in 1965), which were on the pop crossover side of rock & roll in the latter half of the '50s. These are complemented by pop standards -- such as "It's Not for Me to Say," "Sincerely/Teach Me Tonight," "What a Diff'rence a Day Made," "Beyond the Sea" -- on an album that, in terms of repertoire, would not be out of step with the MOR pop LPs Mitch Miller produced at Columbia in the '50s and '60s. Of course, The Greatest Songs of the Fifties is a 2006 release, so it has a slick, semi-synthesized sheen and a warm, hazy glaze of nostalgia which, truth be told, isn't all that far removed from Manilow's big hits of the '70s, when Barry was romanticizing the Copacabana and doing big-band medleys on-stage. Given this, it shouldn't be a shock that Barry comes across as a slick, accomplished professional on these songs, never doing anything surprising but never resorting to hammy shtick, either, the way that Rod occasionally does on his songbook albums. That said, Greatest Songs isn't as rich musically as Rod's records, primarily because Manilow doesn't collaborate with an outside arranger here, or even many other producers: as the back cover says, "all song layouts created by Barry Manilow," and he keeps this within the realm of a nostalgic supper club revue. He does it well and he does it professionally, which will certainly make this record pleasing to his fans, but the record is just a shade too predictable (but never unpleasant) for listeners who aren't already firmly within Manilow's camp. 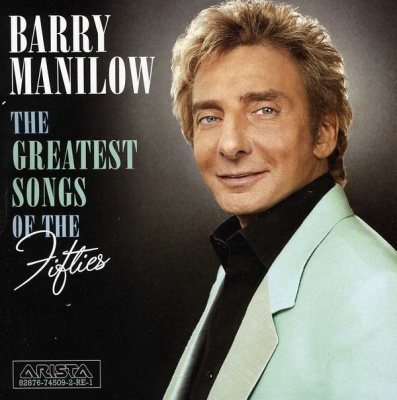 The Greatest Songs of the Fifties Album Information