No one could have predicted the phenomenal multi-platinum success of Barry Manilow's 2002 hits collection, Ultimate Manilow. Coming on the heels of the well-reviewed concept album Here at the Mayflower, the disc debuted on the charts at a stunning number three and began a resurgence of all things Manilow. A six-week promotional tour suddenly turned into a nine-month gig as folks of all ages crowded venues across the country to relive some of "The Old Songs." Capitalizing on the revival, Manilow simultaneously released a concert DVD version of Ultimate Manilow and a double-CD titled 2 Nights Live. Splicing together a couple of New Jersey concert dates, 2 Nights Live covers a gaggle of Manilow hits along with a few lesser-known songs from his concept albums and six previously unrecorded tunes. The discs are divided as if they were two separate concerts complete with their own opening numbers. The "Night One" disc is loaded with hits, including an energetic opening medley that includes "Ready to Take a Chance Again," "Daybreak," "Somewhere in the Night," and "This One's for You." Several more hits follow until the streak is broken by "Harmony," the title tune from Manilow's yet-to-be-seen Broadway musical that he co-wrote with longtime collaborator Bruce Sussman. From that point on, the disc is unable to maintain the momentum generated by the opening nine hit songs, as weaker material like "The Best of Me" and "Let Freedom Ring" are mixed with classics like "Weekend in New England" and "It's a Miracle."

On "Night Two," most of the songs are from Manilow's latter-day concept discs with a few hits scattered throughout. Although the disc is more subdued than the manic first half of "Night One," there are several highlights, including two first-rate songs from Here at the Mayflower, "She Should'a Been Mine" and "They Dance!" The pacing of this disc is much more in tune with its material, and the previously unrecorded song "Forever and a Day" is an eloquent concert closer following the double slam of his two biggest hits, "Copacabana" and "I Write the Songs." Throughout the disc, Manilow cruises through these songs with the same effervescence that he displayed on his first live disc (and only number one album) back in 1977. Although his voice is a little ragged at times (perhaps due to the unexpected tour), he can still sell a song better than most pop singers. In his early years, Manilow knew the value of entertaining a crowd, and he continues to do so in every performance. He makes sure that every person who attends one of his concerts leaves happy, fulfilled, and feeling as if the event delivered more than his or her money's worth. 2 Nights Live is a testament to Barry Manilow's enduring popularity and proves that a beloved singer/songwriter/entertainer can't be counted out no matter what musical trends dominate the day. 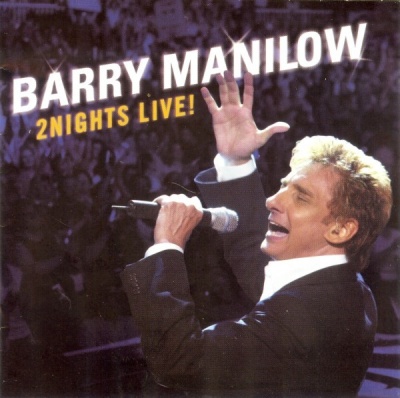