At the dawn of the '90s, Judas Priest were in sad shape: out of touch, seemingly creatively bankrupt, coming off the two worst albums of their career, and left for dead by many observers. Trying to right the ship, Priest jettisoned longtime producer Tom Allom and his tinny '80s sound, as well as the serviceable groove drumming of Dave Holland, and brought in veteran metal producer Chris Tsangarides and onetime Racer X skinsman Scott Travis. Most importantly, though, Priest stopped trying to be a stadium act in the midst of hair metal's heyday. All those changes come into sharp focus as soon as the title cut of Painkiller starts -- Travis' thunderous (and crisp-sounding) percussive maelstrom lights an immediate fire under the bandmembers' asses; Glenn Tipton and K.K. Downing tear through a crushing, diabolical riff; and Rob Halford starts shrieking like a wicked witch, giving perhaps the most malevolent-sounding performance of his career. It's a startling statement of musical purpose that arrived seemingly out of nowhere, heralding a comeback that rivals George Foreman's. Once the leanest, meanest, darkest metal band on the planet, Priest were clearly giving up on the mainstream and instead embracing the thrash and speed metal underground they'd helped spawn. Not only do they come to terms with it here, they teach those whippersnappers a thing or two, marrying furious instrumental pyrotechnics to an unerring sense of songcraft. Spurred on by Travis' jazz-trained double bass assault, Painkiller never once lets up, slowing down only for the elegant menace of the prog-tinged "A Touch of Evil," and without an unmemorable tune in the bunch.

That constant, balls-out intensity is a big reason why metal's younger generation has come to consider Painkiller perhaps the ultimate speed metal album. Older Priest fans will likely complain that the lyrics are silly, and they won't be wrong -- for all its fury, the title track is about the winged knight riding the monster motorcycle depicted on the front cover. However, there's a convincing argument to be made that this brand of comic book fantasy holds up better over time (and is more fun) than most would care to admit (and it can't be any sillier than, for example, members of Morbid Angel worshipping H.P. Lovecraft's fictional Ancient Ones as actual demonic entities). Thus, Painkiller's influence reaches further than many longtime fans might expect: traditionalist power metal bands wanting a harder edge adopted a good chunk of Painkiller's approach, yet its blend of chops and aggression also caught the ears of the emerging extreme metal movement, even inspiring a cover version of the title track on Death's final album, The Sound of Perseverance. In the end, Painkiller secured Judas Priest's legacy with the next generation of metal fans; it's the point where their contributions make the most sense to modern ears more attuned to metal extremes (and more affectionate towards lyrical clichés). It isn't the most important of the Priest classics, but it is the fastest, the meanest, and, well, the most f***ing metal album they ever released. Simultaneously a stunning revitalization and the last great album they would ever make, thanks to Halford's imminent departure. 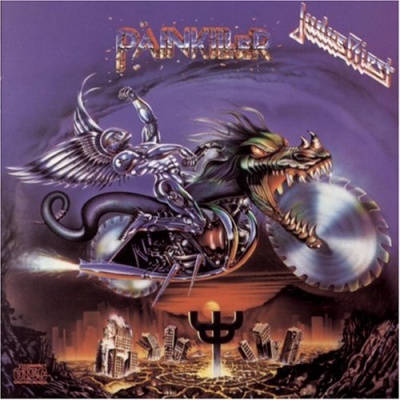