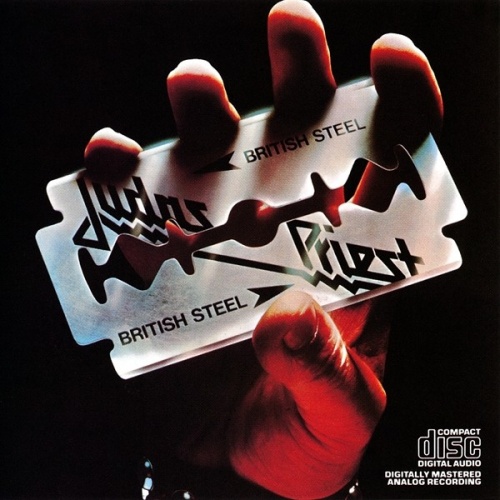 Predating Metallica's self-titled blockbuster by 11 years, Judas Priest's British Steel was a similarly pitched landmark boasting many of the same accomplishments. It streamlined and simplified the progressive intricacies of a band fresh off of revolutionizing the entire heavy metal genre; it brought an aggressive, underground metal subgenre crashing into the mainstream (in Priest's case, the NWOBHM; in Metallica's, thrash); and it greatly expanded the possibilities for heavy metal's commercial viability as a whole. Of course, British Steel was nowhere near the sales juggernaut that Metallica was, but in catapulting Judas Priest to the status of stadium headliners, it was the first salvo fired in heavy metal's ultimate takeover of the hard rock landscape during the 1980s. Packed with strong melodic hooks, British Steel is a deliberate commercial move, forsaking the complexity of the band's early work in favor of a robust, AC/DC-flavored groove. It's a convincing transformation, as Priest prove equally adept at opening up their arrangements to let the rhythms breathe (something Iron Maiden, for all their virtues, never did master). The album is built around the classic singles "Breaking the Law" and "Living After Midnight," both big hits in the U.K., which openly posit Priest as a party band for the first time. But British Steel is hardly a complete break from the band's past. There are still uptempo slices of metallic mayhem bookending the album in "Rapid Fire" and "Steeler," plus effective moodier pieces in "Metal Gods" (ostensibly about gods literally made of metal, though you know full well the band wanted a nickname) and the crawling menace of "The Rage," which features arguably the best Rob Halford vocal on the album. Not everything on British Steel quite holds up today -- the British hit "United" is a simplistic (not just simplified) football-chant anthem in the unfortunate tradition of "Take on the World," while "You Don't Have to Be OId to Be Wise" wallows in the sort of "eff your parents, man!" sentiments that are currently used to market kids' breakfast cereals. These bits of blatant pandering can leave more than a whiff of unease about the band's commercial calculations, and foreshadow the temporary creative slip on the follow-up, Point of Entry. Still, on the whole, British Steel is too important an album to have its historical stature diluted by minor inconsistencies. Rather, it sealed Judas Priest's status as genre icons, and kick-started heavy metal's glory days of the 1980s. It went Top Five in the U.K. and became their first Top 40 album in the U.S., going platinum in the process and paving the way for countless imitators and innovators alike.