Described by the newly reunited band as "the second (and final) part of 1976's pseudo-conceptual Sad Wings of Destiny," 2005's Angel of Retribution is a halfhearted attempt at recapturing the band's pre-Turbo heydays. The only thing that these two records have in common, though, is the winged avatar that graces their respective covers -- Retribution's angel is adorned with gun metal instead of flesh. Judas Priest's 16th studio album will be a frustrating one for fans, as the leadoff track, "Judas Rising," promises great things -- the swirling guitar intro that slowly reveals a mammoth, multi-tracked Rob Halford scream is positively goosebump-inducing -- but what follows is textbook heavy metal played with precision by a group that doesn't have the slightest interest in challenging anybody, least of all itself. Priest have never been poets, but their lyrics were always far removed from the Dungeons & Dragons musings of similar artists like Dio or Manowar, so when these New Wave of British Heavy Metal pioneers offer up a 12-minute epic about the Loch Ness monster ("Lochness"), complete with the chorus "Lochness protects monstrosity/Lochness confess to me," it all feels a little too Spinal Tap. This is a shame because Halford is still a force of nature and Glenn Tipton and K.K. Downing are still the most underrated dual-guitar attack in the genre. These are not "bad" songs, however, especially for a band in its 28th year, so never mind that "Revolution" is essentially a rewrite of Jane's Addiction's "Mountain Song" or that "Eulogy," a ballad that makes references to numerous songs from the group's past, ends up sounding like it's directed at the band itself rather than the listener. Angel of Retribution does indeed rock just hard enough to please longtime fans and convert a few new ones along the way. "Here they come, these Gods of steel/Megatron/devouring what's concealed." 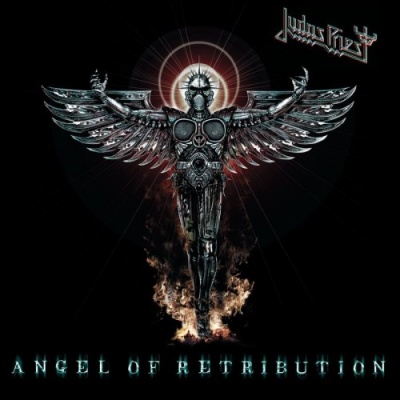