Judas Priest's 18th studio album, FIREPOWER began under inauspicious circumstances. First, guitarist Glenn Tipton, diagnosed with Parkinson's disease a decade ago, found it necessary to retire from the road; second, they lost out to Bon Jovi for induction into the Rock and Roll Hall of Fame; and finally, former drummer Dave Holland passed on before this set's issue. But the sound of FIREPOWER remains unbowed. Its undiminished power and assaultive mayhem are somewhat tempered in its slower moments by slowly unfurling rage, loss, and menace. It was begun in 2016 by Rob Halford, Tipton, and new guitarist Richie Faulkner. They chose two veteran producers to bring it home: Tom Allom, who helmed every JP album between 1979's Unleashed in the East (Live in Japan) and 1988's Ram It Down, and Andy Sneap, master producer/engineer of modern metal. He began his career in 1994 and has worked with everyone from Accept and Exodus to Megadeth, Masterplan, and Testament. He is also a formidable guitarist who is replacing Tipton on the road.

FIREPOWER is meaner and leaner than Redeemer of Souls; the songwriting is more diverse and exceptionally tight. JP recorded all together from the studio floor; overdubs were added in post-production. It creates a kinetic energy and unified sense of purpose not heard consistently since Screaming for Vengeance. The opening title track thunders with double-timed drums, a classic dual-guitar riff, and Halford's scream. He may not be able to reach glass-shattering pitches at age 67, but his midrange wail and baritone growl remain among the mightiest forces in rock. His venomous attack righteously informs this anthemic call to arms. The grooving "Lightning Strike" is led by Scott Travis' kit swinging hard over an angular guitar vamp, which erupts two-thirds of the way through with wonderfully tasty dual leads and solos. While some might wish all 14 tracks were bonecrushers, that's not Judas Priest. The midtempo "Never the Heroes" kicks off with a moody synth line and reverbed kick drums and tom-toms. It breaks down into menacing drama as Halford unfurls a hostile paean for the dead foot-soldiers of wars created by politicians and profiteers.

The knotty chug in "Necromancer" recalls the Judas Priest of yore, while "Children of the Sun" offers a riff worthy of early Black Sabbath before reentering the band's boot-stomping sphere. The structure, drama, and production on the taut "Rising from Ruins" recalls "Blood Red Skies" from Ram It Down -- especially with Ian Hill's thrumming bassline and chant-along chorus. Slower tempos prevail on "Flame Thrower" and "Spectre," but heaviness is never sacrificed. The spiky, raucous "Lone Wolf" is another groover possessing all of Judas Priest's iconic swagger and stomp. "Sea of Red" offers the other side of "Never the Heroes." An homage to the war dead, soldiers and civilians alike, it commences as a power ballad and builds into a rousing metal hymn. Closing in on their 50th anniversary, Judas Priest still possess the musical rigor, showmanship, and force that make other bands bow down. FIREPOWER smokes. 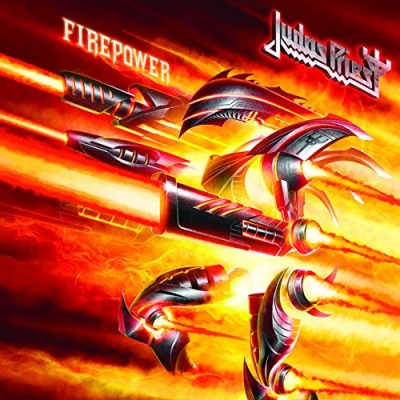