Ram It Down Review

After the failed experiment of Turbo, Judas Priest toned down the synths and returned to the basics, delivering a straight-ahead, much more typical Priest album with Ram It Down. The band's fan base was still devoted enough to consistently push each new album past the platinum sales mark, and perhaps that's part of the reason Ram It Down generally sounds like it's on autopilot. While there are some well-constructed songs, they tend toward the generic, and the songwriting is pretty lackluster overall, with the up-tempo title track easily standing out as the best tune here. And even though Ram It Down backed away from the territory explored on Turbo, much of the album still has a too-polished, mechanical-sounding production, especially the drums. Lyrically, Ram It Down is firmly entrenched in adolescent theatrics that lack the personality or toughness of Priest's best anthems, which -- coupled with the lack of much truly memorable music -- makes the record sound cynical and insincere, the lowest point in the Rob Halford era. Further debits are given for the cover of "Johnny B. Goode." 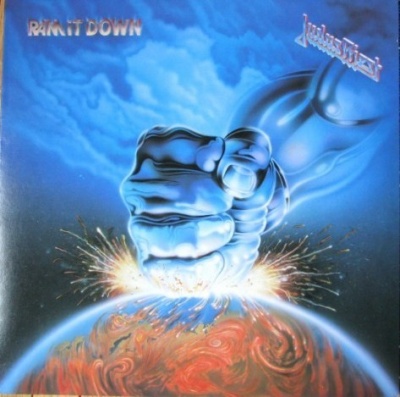 Ram It Down Album Information