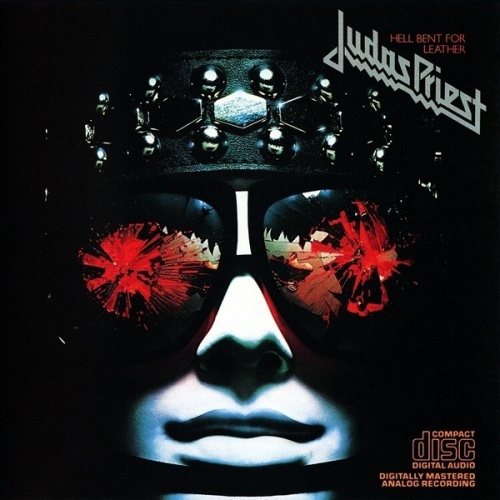 Given the less violent moniker Hell Bent for Leather for U.S. release (as if that makes any sense), Killing Machine is a transitional album between the progressive-minded complexity of Stained Class and the more commercialized stadium rock of British Steel. In terms of image, however, Judas Priest comes into their own here, creating modern heavy metal fashion by donning studded leather outfits that recalled biker subculture (a connection Rob Halford supported by riding a Harley-Davidson on-stage) but -- in one of metal's supreme ironies -- actually came from gay S&M clubs. Now looking as fierce as their music sounded, Priest set about scaling back the ambition of Stained Class, making the songs more concise and immediate, with simpler structures and fewer underlying subtleties. However, the band largely maintains its then-trademark aggression; the simpler songs actually allow them to hike the tempo on the proto-speed metal numbers even more, and there are hints of blues-rock creeping back into the overall sound, complementing the newfound tough-guy swagger in the band's attitude. At the same time, the relative simplicity also provides the first glimpse of the band's more commercial instincts. If these competing impulses don't make for their most cohesive album, it's also true that most of what's here was still pretty peerless for its time. If Stained Class was the death album, Killing Machine is the sex album -- "Delivering the Goods," the title track, "Burnin' Up," and "Evil Fantasies" are all loaded with S&M imagery, while "Running Wild" is a nightlife party anthem, and "Before the Dawn" a morose heartbreak ballad that nonetheless works in context as the downside of all this carnality. "Delivering the Goods" in particular ranks with their best straightforward rockers, while "Hell Bent for Leather" pushes ever farther towards speed metal proper, crystallizing Halford's leather-and-motorcycle obsessions into one of the band's signature statements. The other title track, "Killing Machine," is a midtempo stomper about a contract hitman, and there's yet another brilliantly reinvented cover song, as the band transforms the Peter Green-era Fleetwood Mac chestnut "The Green Manalishi (With the Two-Pronged Crown)" into a heavy, sinister groover. Of the more commercial material, the anthemic chorus of "Evening Star" leaves the best impression, while "Rock Forever" is their first explicit ode to heavy metal itself (and there would be many, many more to come). The uneasiest implications for the future come from "Take on the World," a lunkheaded stadium shout-along that gave the band its first British hit single, and is clearly patterned after Queen's "We Will Rock You." Occasional missteps and all, Killing Machine closes the book on Judas Priest's early period, which constitutes some of the most influential heavy metal ever recorded. The flood of NWOBHM talent they'd inspired was about to be unleashed on the record-buying public, and henceforth, Priest was intent on reaping the rewards. They would remain a vital force in their second, more commercial phase (more so than some fans of their late-'70s classics might care to admit), but their work of redefining the genre had largely been completed.