Easily one of the most important heavy metal albums ever released, Stained Class marks the peak of Judas Priest's influence, setting the sonic template for the New Wave of British Heavy Metal more than any other single recording. This is the point where Priest put it all together, embracing their identity as the heaviest band on the planet and taking the genre to new heights of power, speed, musicality, and malevolence. Not until Painkiller would the band again be this single-minded in its focus on pure heavy metal. Their blues-rock roots have been virtually obliterated; largely gone, too, are the softer textures and gothic ballads of albums past. The lone exception is the morbid masterpiece "Beyond the Realms of Death," on which the band finally finds a way to integrate the depressive balladry of songs like "Epitaph" and "Last Rose of Summer" into their metal side. Starting out with quiet, mournful verses, the song's chorus is ripped open by a blazing guitar riff as Rob Halford shrieks about leaving the world behind, a dramatic climax that sounds like a definite blueprint for Metallica's "Fade to Black." Yet it wasn't this song that inspired the ridiculous 1989-1990 court case involving the suicide pact of two Nevada teenagers; that honor goes to the Spooky Tooth cover "Better by You, Better Than Me" (penned by none other than the "Dream Weaver" himself, Gary Wright), on which the band allegedly embedded the subliminal backwards-recorded message "Do it." Astounding implausibility aside (as the band pointed out, why encourage the suicides of fans who spend money?), it isn't hard to see why Stained Class might invite such hysterical projections. On balance, it's the darkest lyrical work of the band's career, thematically obsessed with death, violence, and conquest. That's not to say it's always approving. Sure, there are battle cries like "White Heat, Red Hot," horrific nightmares like "Saints in Hell," and elements of the fantastic in the alien monsters of "Invader" and stone classic opener "Exciter." But the band stays philosophical just as often as not. The twisting, turning title track adopts the biblical view of man as a hopeless, fallen creature preyed upon by his baser instincts; "Savage" foreshadows Iron Maiden's "Run to the Hills" in depicting violent colonizers as the real savages; and closer "Heroes End" laments the many legends born from untimely deaths. So in the end, what really cements the celebrated morbidity of Stained Class is the sinister atmosphere created by the music itself. Never before had heavy metal sounded so viciously aggressive, and never before had that been combined with such impeccable chops. Seemingly at will, Tipton and Downing spit out brilliant riffs that cut with knife-like precision, usually several per song. This means that there's a lot to take in on Stained Class, but if there's nothing here as immediate as the band's later hits, there's also a tremendous amount that reveals itself only with repeated listens. While the album's overall complexity is unrivalled in the band's catalog, the songs still pack an enormous visceral impact; the tempos have often been jacked up to punk-level speed, and unlike albums past, there's no respite from the all-out adrenaline rush. Heavy metal had always dealt in extremes -- both sonically and emotionally -- but here was a fresh, vital new way to go about it. It's impossible to overstate the impact that Stained Class had on virtually all of the heavy metal that followed it, from the NWOBHM through thrash and speed metal onward, and it remains Judas Priest's greatest achievement. 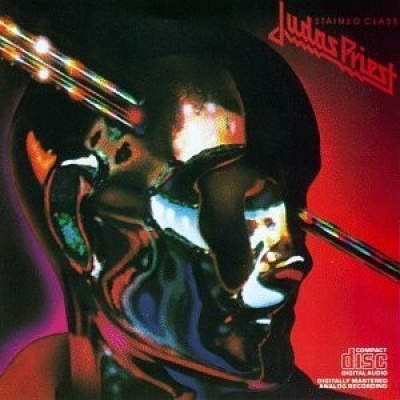